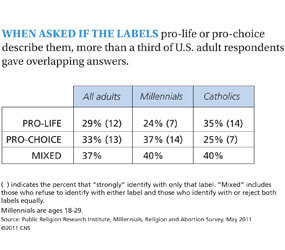 WASHINGTON – The headline on the introduction to a new report on the generation of people ages 18-29 encapsulates its conclusions as “the peculiar profile of millennials on abortion.”

Peculiar also might describe how it looks that a significant portion of the population surveyed by the Public Religion Research Institute simultaneously identify with both the terms “pro-choice” and “pro-life” to describe themselves.

Focusing largely on views on abortion and same-sex marriage, the survey conducted by phone interviews in April and May found that the generation of adults born since 1982 doesn’t differ significantly from their elders in that a majority believes abortion should be legal.

Another apparent contradiction comes from the high percentage of people across all age groups who say both the terms “pro-choice” and “pro-life” describe them somewhat or very well. Among all of the 3,000 adults sampled for the survey, 70 percent said the term “pro-choice” describes them well or somewhat, and 66 percent identify with the word “pro-life.” Seventy-five percent of millennials identify at least somewhat as “pro-choice,” and 65 percent said the word “pro-life” describes them.

At a June 9 forum hosted by the Brookings Institution where the survey was released, Robert Jones, CEO and founder of the Public Religion Research Institute, explained that in focus groups, people reiterated that they consider themselves fitting under both labels.

Karlyn Bowman, a senior fellow at the American Enterprise Institute who analyzes American public opinion and also was at the forum, described the “pro-choice”/”pro-life” overlap as a significant portion of those surveyed. It’s somewhat akin to saying, “It’s murder and I’m for it,” Bowman said.

But she went on to explain that given decades of polling on American attitudes toward abortion, the result isn’t surprising.

“It’s clear that Americans value life and they value choice,” she said. The intensity in public debate over abortion has long been driven by the smaller segments of society that are strongly opposed to abortion in all circumstances and those who strongly support it being legal in all situations, she noted. Poll after poll since the 1970s reflects a majority of Americans fall somewhere in the middle.

“The media cover the pro-life and the pro-choice activists because the media loves conflict,” Bowman said. “But that’s not where the majority opinion is.”

Paul Jarzembowski, executive director of the National Catholic Young Adult Ministry Association, told Catholic News Service in a telephone interview June 10 that the seeming inconsistency about defining oneself as both “pro-life” and “pro-choice,” is for millennials partly a matter of having a broad, pastoral, inclusive approach to others.

“Young adults live in a culture of choice,” he said. “They choose their religion, they see choices as defining who they are.”

He said he’s not surprised that while personally opposing abortion and even thinking of it as murder, many young people also would be reluctant to expect others to accept the same beliefs or demand that society make abortion unavailable.

As in other opinion polls, the Public Religion Research Institute survey correlated people’s views on abortion and church attendance, finding that the more regularly someone attends a Catholic or evangelical church, the more likely they are to oppose abortion, for instance.

But it also found that most Americans believe it is possible to disagree about abortion or homosexuality and the teachings of their religion and still be in good standing with their faith.

Jarzembowski said when it comes to young adults, such attitudes likely relate to the fact that only 15 percent of millennials attend church on a weekly basis. He said that could certainly account for the high acceptance of same-sex marriage.

“They are not exposed to the church’s natural law arguments,” for instance, and don’t know about the other elements that go into the Catholic teaching that homosexual acts are “disordered,” said Jarzembowski. Plus, those teachings don’t lend themselves to easy explanation the way “abortion is murder” does. Instead, in school and in society, people hear “the church hates gay people,” he said.

The Catholic Church opposes same-sex marriage and teaches that any sexual activity outside of marriage is sinful. But it also teaches that the dignity of homosexual individuals must be respected as well as their rights as people, such as the right to employment and freedom from unjust discrimination.