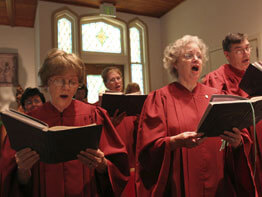 WASHINGTON – When the U.S. bishops meet in November, they will debate and vote on how Catholics should participate in the political process, what Catholic high school students should learn in religion classes and how to best ensure that liturgical music is both doctrinally sound and pleasing to the ear.

They also will begin a new era in the history of the U.S. Conference of Catholic Bishops by electing a new president and vice president, voting on revised bylaws and filling several committee posts created by the USCCB restructuring process.

Other items on the agenda for the Nov. 12-15 fall general assembly in Baltimore are a document on education for chaste living and a revised norm defining “acts of extraordinary administration” that require a bishop to obtain the consent of his diocesan advisers.

Two liturgical documents – on revised readings during Lent and weekday celebrations of the Liturgy of the Word – also will come before the bishops, who will also vote on a Spanish-language version of the latter document.

The USCCB Committee on Pro-Life Activities will ask the bishops for permission to draft a pastoral document on reproductive technologies to respond to the “great confusion among lay Catholics regarding the church’s teaching” on the subject. Under a projected timeline, the document would come up for a vote at the November 2008 meeting.

This marks the second year in a row that the bishops will hold their fall session at the Baltimore Marriott Waterfront Hotel. The bishops will celebrate Mass together Nov. 12 to mark the centenary of the U.S. church becoming a mission-sending church.

The bishops also will hear reports on the current status and preliminary findings of the study they commissioned on the causes and contexts of child sexual abuse by clergy and on their “For Your Marriage” initiative and a preview of planned U.S. participation in World Youth Day next year in Sydney, Australia.

The politics document, called “Forming Consciences for Faithful Citizenship: A Call to Political Responsibility From the Catholic Bishops of the United States,” has been put out in some form by the bishops before every presidential election for more than 30 years.

This year’s document, however, underwent a wider consultation by seven USCCB committees and will be considered by the full body of bishops. In past years, the documents were approved by the Administrative Committee, made up of the executive officers of the USCCB, elected committee chairmen and elected regional representatives.

In the 37-page draft document, the bishops admit that “Catholics may feel politically disenfranchised, sensing that no party and too few candidates fully share the church’s comprehensive commitment to the dignity of the human person.”

“As Catholics, we should be guided more by our moral convictions than by our attachment to a political party or interest group,” the draft document says. “When necessary, our participation should help transform the party to which we belong; we should not let the party transform us in such a way that we neglect or deny fundamental moral truths.”

The bishops also are to vote on a shortened version of the text, designed for use as a parish bulletin insert.

The proposed curriculum framework, prepared by the bishops’ Committee on Catechesis, is intended as a guide for publishers of catechetical materials and to help diocesan offices and Catholic high schools develop their own curriculum guidelines and evaluate religion textbooks for use in their schools.

The draft outlines six core semesters plus five elective courses from which schools may choose two. It said national uniformity in sequence of the core semesters was valuable because each course builds on a foundation laid by the others and because U.S. society is so mobile.

The other educational document to be presented to the bishops this fall is a 21-page set of guidelines on catechetical instruction on human sexuality for students from kindergarten through 12th grade. This document has been worked on since 2003 in response to catechetical publishers who had been seeking guidance on this topic.

A draft version of the document, “Catechetical Formation in Chaste Living: Guidelines for Curriculum and Publication Design,” was sent to the bishops for review in the spring.

Its introduction states that these guidelines should not only help publishers, but parents, catechists and teachers “in their respective roles in this crucial and delicate task.”

The document on liturgical music – which has gone through 10 drafts – updates the 1972 statement, “Music in Catholic Worship,” as a follow-up to the 2001 Vatican instruction “Liturgiam Authenticam” (“The Authentic Liturgy”), which called on each bishops’ conference to compile a “directory or repertory of texts intended for liturgical singing.”

The statement before the bishops is to be followed within three years by a directory of liturgical songs for use in U.S. parishes. It calls for a balancing of three important aspects of music for worship – liturgical, pastoral and musical – and says “no judgment is sufficient on its own, nor does any one judgment prevail over the other.”

The bishops also will elect a successor to Bishop William S. Skylstad of Spokane, Wash., USCCB president for the past three years. If they follow past practice, Cardinal Francis E. George of Chicago, vice president of the conference since 2004, will become president.

Also to be selected are a new treasurer-elect and chairmen and/or chairmen-elect of several new committees created in the USCCB reorganization. Among them are the committees on Cultural Diversity; National Collections; Laity, Marriage, Family Life and Youth; and Clergy, Consecrated Life and Vocations.

New bylaws and a new committee handbook must be approved to conform with the new USCCB structure.

The bishops will be asked to approve a $147.7 million budget for 2008 and a 16 percent reduction in the assessments on dioceses that help fund conference activities. Despite the drop in assessments, the 2008 budget is 7 percent more than in 2007, due primarily to growth in funds received from national collections and federal grants for migration-related work.

The canonical revision before the bishops would require the consent of the diocesan finance council and the college of consultors in five situations: when a bishop takes out loans above a certain amount; when he makes a financial settlement larger than that amount; when he regularly operates or manages a business “not substantially related to the performance of the religious, spiritual, educational or charitable purposes of the church”; when he enters into a contract that could present a conflict of interest for himself or other diocesan officials; and when he files for bankruptcy.

Changes in the Sunday and weekday readings for Lent, which require the same approvals, are designed to correct problems “of suitability for liturgical proclamation, poetic expression, grammar and vocabulary,” according to background material submitted to the bishops.

Some of the changes in the 111-page text simply replace the words “he” or “they” with Jesus, God, the disciples or other terms to make the passage more clear. Others make the text more gender-neutral by replacing, for example, “fathers” with “ancestors” or “men” with “human beings.” But in at least one case, it changes “person” to “man.”

Other revisions are more substantive: “not according to our works” becomes “not because of any merit of ours”; “by the power that enables him also to bring all things into subjection to himself” becomes “by his power to subject everything to himself”; and “as a holocaust” becomes “as burnt offerings.”

The second liturgical document before the bishops – to be considered in both English and Spanish – will serve as a resource for weekday celebrations in U.S. parishes in the absence of a priest but with the distribution of Communion.

When no priest is available for daily Mass, the document says, “the bishop will, nonetheless, encourage the faithful to come together in church to pray whenever this is possible. … A Liturgy of the Word may also be celebrated, enabling the faithful to be nourished by the word of God proclaimed and to respond in praise and thanksgiving.”

A weekday Liturgy of the Word may be celebrated by a deacon or layperson, the document says, but a layperson “does not use words that are proper to a priest or deacon and omits those rites, gestures and texts that are too readily associated with the Mass and which might give the impression that the layperson is ordained.”

The canonical and liturgical changes must be approved by two-thirds of the Latin-rite members of the USCCB and by the Vatican.