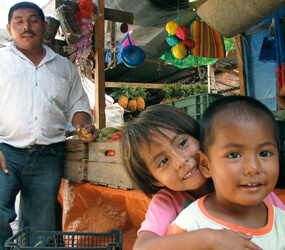 COPAN RUINAS, Honduras – Oscar Garcia used to sell 100 pounds of tomatoes every day in the municipal market of this colonial town near the Guatemalan border. Since the June 28 ouster of President Manuel Zeyala, Garcia sells just 40 pounds of tomatoes and has to moonlight as a hotel security guard to support his family.

“I’m working day and night and it’s barely enough,” said Garcia, the father of four. “There are people here starving to death because of the political crisis.”

The June 28 coup plunged Honduras into a political crisis, but also deepened long-standing economic problems in one of the hemisphere’s poorest countries. Over the past four months, exports have diminished, citizens have reduced their spending and international development aid has been suspended.

The suspended aid included $11 million from the U.S. Millennium Challenge Corp. for transportation projects and funds from Venezuela that were expected to exceed the more than $200 million the South American country delivered in 2008.

The tourism industry also has taken a hit as curfews, protests in the national capital, Tegucigalpa, and travel advisories from foreign governments have dissuaded many visitors from traveling to destinations such as the Maya ruins near Copan Ruinas and the diving hot spots off the Bay Islands.

The Tegucigalpa-based Chamber of Commerce and Industry estimates that more than 100,000 jobs were lost nationwide from mid-July to mid-October, but gauging the true economic impact of the political unrest is difficult. An editorial in the Tegucigalpa newspaper Diario Tiempo called the situation “worse than Mitch,” a reference to the 1998 hurricane that stormed through Central America. Honduras has yet to fully recover from it.

Mauricio Diaz Burdett, coordinator of the nonpartisan Honduras Social Forum on Foreign Debt and Development, concurred with the Hurricane Mitch comparison, although he said, “Honduras can remedy this crisis.”

Diaz, whose nongovernmental organization focuses on economic policy, poverty reduction and fighting corruption, projected that the Honduran economy would shrink by 4.5 percent in 2009, while exports would diminish by $1 billion – roughly a 15 percent drop from 2008.

Others were less dramatic in their assessments of the economic crisis. Father German Calix, national director of the aid agency Caritas Honduras, said “things were already bad” before the coup. He explained that Honduras had been hit hard by the global economic downturn because of its dependence on the U.S. economy. Father Calix cited diminished Honduran exports and a reduction in the flow of remittances sent home by more than 1 million Hondurans living abroad.

Those sentiments were commonly expressed in Copan Ruinas, a picturesque town of cobblestone streets and whitewashed buildings with red-tile roofs. Visits to the nearby ruins had increased by more than 400 percent between 2001 and 2008, according to Honduran officials, but those numbers dropped precipitously after the coup.

The local priest, Father Daniel Correa, said living standards had improved over the past decade due to increased tourism that provided employment in one of Honduras’ most impoverished regions. He added that the current lack of visitors was creating economic hardships for many of his parishioners at St. Joseph the Worker Parish.

One Copan Ruinas hotel owner, Belgian Geert van Vaeck, operates a bus service that previously transported 60 passengers daily from Antigua, Guatemala. He said the vehicles began arriving empty after June 28 due to fears of violence in Honduras and rumors, allegedly spread by Guatemalan tourism operators, of difficulties crossing the border.

Van Vaeck said layoffs have been common in Copan Ruinas and that most establishments have made informal arrangements with employees to preserve jobs by shortening shifts and reducing salaries. Such arrangements often violate the minimum-wage rules unveiled last year by Zelaya, who decreed that workers must earn at least $300 per month – an increase of 62 percent from the old salary.

The church had its own struggles when the minimum wage went up “without consultation,” Tegucigalpa Cardinal Oscar Rodriguez Maradiaga told Catholic News Service. Many full-time employees had their hours cut to meet the new minimums, he said.

“The church is very poor,” he said. “We live off the donations of the people.”

The cardinal blamed Zelaya’s government for other mistakes.

“The past government was saying we don’t need funds from the IMF (International Monetary Fund),” he said. But the cardinal said the real reason Zelaya declined IMF funds is because Honduras’ federal finances were such a mess. Zelaya never presented a federal budget this year, but continued to spend, the cardinal said.

Because of a loan from Venezuela that Zelaya accepted to cover a shortfall, there is a new debt to be repaid.

“This was no gift,” the cardinal said.

Diaz, the social forum coordinator, said the impact of the increase in the minimum wage is uncertain since “the majority of Hondurans are self-employed” in agriculture and small businesses, while others work in foreign-owned factories exempt from minimum-wage laws. The federal government is also exempt from paying the new minimum wage.

Equally uncertain is how the political situation will unfold, but Diaz cautioned against expecting the Nov. 29 elections to resolve the country’s economic problems.

“The electoral process for a new president doesn’t magically just resolve these problems,” he said. “Many other things are required that have to do with the social and economic policies that the country needs.”

Back in Copan Ruinas, Garcia, the tomato vendor, also expressed doubts that resolving the political crisis would somehow resolve the economic crisis. His wife said she was ready to head for the United States.