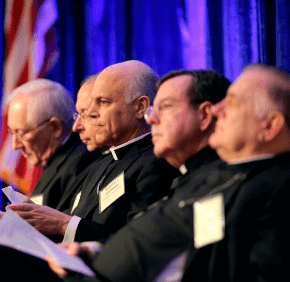 BALTIMORE – The U.S. bishops approved a formal statement on pornography, and an updated revision of a quadrennial statement on the intersection of Catholic teaching in the political arena as part of their Nov. 16-19 fall general meeting in Baltimore.

The votes were made during the public portion of the meeting, which ran Nov. 16-17. The bishops were to meet in executive session Nov. 18-19.

All votes had to be recorded the old-fashioned way – by hand – as the electronic voting system, which brings near-instantaneous results, failed. With the failure of electronic voting, results were not known for hours after the votes.

The 2015 version of political responsibility document, “Forming Consciences for Faithful Citizenship,” passed 210-21 with five abstentions, and a separate vote on the statement’s introductory note passed 217-16 with two abstentions; two-thirds of diocesan bishops, or 181 votes, were needed for passage.

It reflects on long-held concerns related to abortion and the needs of poor people. It also references emerging issues related to court decisions on same-sex marriage, public policies that affect religious freedom, and a rising concern for the environment as climate change affects more people around the world.

Questions came from five bishops who said that the document does not adequately address poverty, as Pope Francis has asked the church to do.

The most vocal critic was Bishop Robert W. McElroy of San Diego, who said he was concerned that because poverty and the environment did not receive the same priority as abortion and euthanasia, that some people “outside of this room” would “misuse” the document and claim other issues did not carry the same moral weight.

The pornography statement, “Create in Me a Clean Heart: A Pastoral Response to Pornography,” declares that pornography is a “mortal sin” and urges Catholics to turn away from it. Approval of the statement came on a vote of 230-4 with one abstention, with 181 votes needed for passage.

Bishop Richard J. Malone, of Buffalo, New York, chair of the bishops’ Committee on Laity, Marriage, Family Life and Youth, described pornography as a “dark shadow in our world today.”

He added that pornography is a “particularly sinister instance of consumption” where men, women and children are “consumed for the pleasure of others.”

The bishops approved the revised priorities and plans for 2017-20 in a 233-4 vote Nov. 17. The plans emphasize their upcoming focus in five major areas: evangelization, family and marriage, human life and dignity, religious freedom and vocations and ongoing formation.

The revised plans include the same headings but feature some different wording in the “emphasis areas,” which provide more detailed explanations.

In comments on the floor, there were mixed views about the revised plans presented by Archbishop J. Peter Sartain of Seattle, chairman of the bishops’ Committee on Priorities and Plans and U.S. Conference of Catholic Bishops secretary, along with Archbishop Gregory M. Aymond of New Orleans, USCCB secretary-elect.

Archbishop Blase J. Cupich of Chicago said he was afraid the plans seemed “too self-referential” with their emphasis on advocacy for religious freedom and not enough emphasis on global poverty or immigration reform.

As part of a series of elections, the bishops chose for Archbishop Dennis M. Schnurr of Cincinnati as treasurer-elect. They also elected Msgr. J. Brian Bransfield as the new general secretary; he has been associate general secretary for five years. He will succeed Msgr. Ronny Jenkins, who has served two three-year terms.

The bishops also voted on a number of chairmen-elect for standing committees. These “elect” positions mean the winning bishops will take office at the conclusion of the 2016 fall general meeting.

While the Nov. 13 terror attacks on Paris were not formally on the USCCB agenda, it crept into the conversation nonetheless.

Auxiliary Bishop Eusebio Elizondo of Seattle, chairman of the USCCB Committee on Migration, issued a statement Nov. 17 on the floor of the meeting.

“I am disturbed,” Bishop Elizondo said, “by calls from both federal and state officials for an end to the resettlement of Syrian refugees in the United States” in the wake of the attacks. “These refugees are fleeing terror themselves – violence like we have witnessed in Paris. They are extremely vulnerable families, women, and children who are fleeing for their lives. We cannot and should not blame them for the actions of a terrorist organization.

“Moreover, refugees to this country must pass security checks and multiple interviews before entering the United States – more than any arrival to the United States. It can take up to two years for a refugee to pass through the whole vetting process. We can look at strengthening the already stringent screening program, but we should continue to welcome those in desperate need,” he added.

Dominican Sister Donna Markham, president and CEO of Catholic Charities USA, told the bishops Nov. 17 that Catholic Charities has been sent “disturbing mail from people angry that we are trying to help these people. It’s tragic.” She added of the Syrian refugees, “We’re ready to help – if we can get them here.”

Archbishop Joseph E. Kurtz of Louisville, Kentucky, USCCB president, urged his fellow bishops to pray for virtues that would help them be better spiritual leaders.

“Lord, give us an understanding heart and a credible moral voice,” he said in his homily at a Nov. 16 Mass at the Basilica of the National Shrine of the Assumption of the Blessed Virgin Mary in Baltimore.

Archbishop Kurtz also urged the bishops to pray for the “eyesight to see as Jesus sees” and for the renewed grace to love God and serve others.

In his USCCB presidential address, Archbishop Kurtz called on his fellow bishops Nov. 16 to imitate the “pastor’s presence” exhibited by Pope Francis during his recent U.S. visit, “touching the hearts of the most influential, the forgotten and all of us in between.”

Noting the upcoming Year of Mercy that begins Dec. 8, Archbishop Kurtz said a ministry of “presence means making time and never letting administration come between me and the person. It’s seeing the person first.”

“Our hearts respond to (the pope’s) call to be pastors who are present, welcoming and eager to walk with our people,” he added.

On the first day of the assembly, an afternoon session took up how the U.S. Catholic Church can move forward in response to the Supreme Court’s ruling on same-sex marriage this year. To that end, the U.S. bishops are planning to develop a pastoral plan for marriage and family life. The pastoral plan, according to Bishop Malone, will seek the bishops’ input.

Archbishop Salvatore J. Cordileone of San Francisco, chairman of the bishops’ Subcommittee for the Promotion and Defense of Marriage, said the Supreme Court’s decision was a “great disappointment,” but it was not unexpected.

A convocation for Catholic leaders planned for 2017 represents “a new way of reaching and teaching our people,” Bishop Malone said in a presentation to his fellow bishops.

Bishop Malone was joined by two other bishops in a presentation on the national convocation, planned for July 1-4, 2017, in Orlando, Florida, and the communications research leading up to it. The theme of the meeting is “The Joy of the Gospel in America.”

Archbishop Timothy P. Broglio painted a dire picture of “a pastoral problem that affects all of us” in a report to his fellow bishops about the “desperate” shortage of Catholic priests serving as military chaplains.

The head of the U.S. Archdiocese for the Military Services said there were only 217 Catholic priests serving the 1.8 million Catholics in the U.S. armed forces around the world, and the numbers would soon decline due to retirements and medical leaves.

“Witnesses to Freedom” will be the theme of the 2016 observance of the Fortnight for Freedom, Archbishop William E. Lori of Baltimore, chairman of the Ad Hoc Committee for Religious Liberty, told the assembly.

“The fortnight gives us an opportunity to remember those witnesses past and present through the church, witnesses who testify to the meaning of freedom of conscience and the obedience of the truth,” he said.

The two-week event will include a nationwide tour of first class relics of St. Thomas More and St. John Fisher. Archbishop Lori said details of the tour have yet to be arranged, but that a schedule will be distributed when it is finalized.

Contributing to this roundup were Nancy Frazier O’Brien, Dennis Sadowski and Carol Zimmermann.