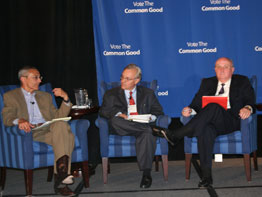 PHILADELPHIA – At a July conference on faith, politics and the quest for the common good, 800 Catholics from around the nation ratified a platform based on Catholic social teaching and aimed at capturing the attention of both political parties this election season.

The “Platform for the Common Good” outlines an approach to national elections based on Catholic social teachings that emphasize love of neighbor and caring for others. It was finalized by delegates to the July 11-13 Convention for the Common Good, described as the first grass-roots effort of its kind.

The platform urges candidates and elected officials to put the common good before narrow partisan agendas.

Built on the words of the preamble to the U.S. Constitution to “establish justice, ensure domestic tranquility, provide for the common defense, promote the general welfare and secure the blessings of liberty to ourselves and posterity,” the document also draws from the U.S. bishops’ statement on political responsibility, “Forming Consciences for Faithful Citizenship.”

It advocates Catholic social teaching on issues including the economy, health care, immigration, environmental stewardship, war and a consistent culture of life. The conference and the platform were organized by Catholics in Alliance for the Common Good; Network, a national Catholic social justice lobby; and another dozen sponsors.

At a series of forums held in 40 states over several months, more than 2,000 people contributed to drafting the platform. The nonpartisan document will be sent to political candidates and parties, organizers said.

Alexia Kelley, executive director of Catholics in Alliance for the Common Good, told The Catholic Standard & Times, newspaper of the Philadelphia Archdiocese, that the goal of the effort is to “create a culture where everybody is treated with a dignity that all human life requires and demands.”

The convention was carefully organized to be nonpartisan. All of the official literature gave both presumptive presidential candidates, Sen. Barack Obama, D-Ill., and Sen. John McCain, R-Ariz., equal coverage.

Both candidates were invited but neither came. Obama sent a congratulatory video that mentioned that his previous work as a Chicago community organizer was partially funded by the Catholic Campaign for Human Development.

Democratic Sen. Bob Casey of Pennsylvania made an appearance the first day. His Pennsylvania counterpart, Republican Sen. Arlen Specter, who is battling a recurrence of cancer, sent a video.

Former U.S. Rep. Charles Dougherty of Pennsylvania was the sole Republican to address what was a predominantly Democratic crowd. He was given a courteous reception and was applauded when he emphatically declared that as a Catholic he was absolutely opposed to abortion.

“The pro-life issue did not seem to be a priority with the people at the convention but I thought I got a very nice reception,” Dougherty said afterward.

In a closing address, Sister Helen Prejean, a Sister of St. Joseph of Medaille and the country’s foremost death penalty opponent, said American attitudes about capital punishment have changed in light of recent exonerations made possible through DNA evidence. She said changing Catholic attitudes also are the result of Pope John Paul II’s statements condemning use of the death penalty.

Mary Ellen Blackwell, director of parish social ministry for Catholic Charities of the Diocese of Trenton, N.J., was among those who saw the event as part of a call to conscience from the Catholic community.

“Catholics have never come together as a group to look at the issues and give them a Catholic voice,” she told The Monitor, Trenton’s diocesan newspaper, during a break. “Being part of it is remarkable.”

“This is the beginning of a chance to form a united Catholic conscience on social justice issues and call legislators and politicians to account for their conduct,” she said, adding that people need to view social justice issues “not only from a local perspective but a national and global one.”

Father Robert Schulze, director of the Trenton Diocese’s Office of Jail and Prison Ministry, took heart from the many lay and religious organizations represented at the event.

“It was a coming together for the first time of a broad landscape of the Catholic community in social justice,” he said.

Father Schulze said the “Faithful Citizenship” material distributed at the convention helped to “point out the issues that Catholics need to keep in mind as they vote.”

He said he appreciated that “it was stressed over and over many times that to be a good Catholic is to be a responsible political person. There’s an old saying that religion and politics don’t mix but that’s inaccurate. Politics calls us to a moral response and that was stressed.”