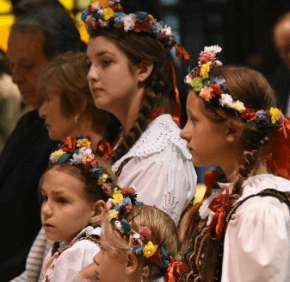 ORCHARD LAKE, Mich.  — “Wherever you are, you’ll still be Polish.”

The iconic statement from St. John Paul II as portrayed in the film “Karol: A Man Who Became Pope” was reiterated by Miami Archbishop Thomas G. Wenski during a Mass celebrating Polish spirituality.

The archbishop was joined by Polish priests, bishops and Cardinal Adam J. Maida, the retired archbishop of Detroit, at the Chapel of Our Lady of Orchard Lake to celebrate 1,050 years of Polish Christianity.

“In this chapel, built by Polish-American Catholics, today we celebrate our ‘Polish-ness,’ the form in which we celebrate our Catholic faith,” Archbishop Wenski said. “Polish roots run deep, roots of faith and culture, anchors for the Polish people.”

, uniting the country under a common faith. In 2016, the National Polish Apostolate, the Polish American Priests’ Association and the Catholic League for Religious Assistance to Poland and Polonia celebrated that moment 1,050 years later.

The Mass featured a procession of people in traditional Polish dress and Polish-Catholic traditions. Jaroslaw Golembiowski, a composer and pianist, played a musical program before Mass.

Cardinal Maida, the son of a Polish immigrant and a St. Mary’s Preparatory alum, blessed the marble shrine from Italy, which cost $75,000 and contains a first-class relic of blood from the sainted pope.

The shrine was made possible largely through anonymous donations and is intended as a site for pilgrimage, with its care entrusted to the rector of SS. Cyril and Methodius Seminary.

“On behalf of all the faithful who aren’t blessed with Polish heritage, thank you for your welcome and may you have a blessed anniversary,” Archbishop Vigneron said, adding that the shrine at this location will be a place of pilgrimage especially on the feast of St. John Paul, Oct. 22.

Msgr. Thomas C. Machalski Jr., chancellor-rector of Orchard Lake Schools and rector of SS. Cyril and Methodius Seminary, told The Michigan Catholic, Detroit’s archdiocesan newspaper, it was an honor for the Orchard Lake campus to house the archdiocesan shrine.

He said when St. John Paul visited in 1976 as Archbishop Karol Wojtyla, he was a student at the college and was the cross bearer for Mass.

“It’s so hard to comprehend, this man who is a saint, I talked to, he sailed in our lake, visited our school, walked the same sidewalk and halls we do,” said Msgr. Machalski.

The priest added that the location was the perfect spot for the shrine.

“It fulfills our humility in these schools, and it’s an honor to care for the shrine,” Msgr. Machalski said. “He wouldn’t like the fanfare, he was so humble, but he’d be so happy to see us continuing the mission,” he said of the Polish pope.

Orchard Lake is already regarded as the capital of Polish-American culture in the United States, and having a shrine there to one of the most beloved leaders in this generation will only add to the Polish presence, according to Msgr. Machalski.

“Having the national shrine to John Paul II here is going to add to the sense of closeness between the campus and the Polish people,” he said. “People will be able to come here and pray before the relics, deepening their faith as they attempt to live out their faith in society. It’s another chance to celebrate our Polish culture.”