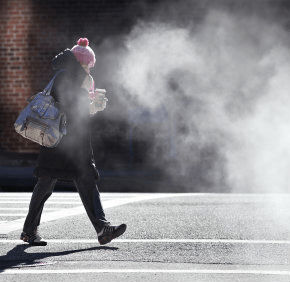 By Maria Wiering
mwiering@CatholicReview.org
UPDATED 3:30 p.m. Jan. 8, 2013: As greater Baltimore braced itself against sub-zero wind chill temperatures, Catholic Charities of Baltimore teamed with the city to house homeless people overnight Jan. 6-8. The city called a “severe code blue” weather alert, enacting an emergency plan for sheltering homeless in extreme temperatures. The city’s high was expected to reach 15 degrees Jan. 7, with a wind chill of 11 degrees below zero.
Catholic Charities offered emergency overnight shelter for women at My Sister’s Place Women’s Center, a day program adjacent to the Basilica of the National Shrine of the Assumption of the Blessed Virgin Mary in Baltimore. Sarah’s Hope, Mount Street, a 24-hour outreach of St. Vincent de Paul of Baltimore for homeless women and children, also added four beds to its emergency shelter program. All 12 of its emergency shelter beds were occupied for the night of Jan. 6 and are expected to be occupied again Jan. 7, said the outreach’s assistant director Danielle Rankin.
“We had outreach workers from the city going around to where they know people normally sleep outside to try to encourage them to go into one of these shelters,” said Mary Anne O’Donnell, Catholic Charities’ director of community services. “There were all sorts of temporary openings (at shelters) created for people to get off the street. To my knowledge, no one got turned away from any of these facilities last night because there was no room.”
To view a slideshow, navigate the arrows below.
At Loyola University Maryland in Baltimore, a sprinkler pipe burst in the Humanities building Jan. 7, flooding areas of the building that face the Quad and causing significant damage to all floors, according to university officials. The pipe burst because of the sub-zero wind chill temperatures greater Baltimore felt Jan. 7, a result of the polar vortex.
The building’s honors lounge, president’s office, refectory, hug lounge and terrace level storage are closed during the estimated three weeks needed to make repairs, according to Loyola officials. Carpets, ceilings and floors were heavily damaged and are the focus of the restoration efforts. Drying and demolition is has begun and rebuilding/reinstalling is expected to begin Jan.11-12.
Staff from the Baltimore university worked Jan. 7 and into Jan. 8 to clean up, assess damage and make plans for restoration, according to Loyola officials. Faculty, staff and administrators who work in the Humanities building should be prepared for minor disruptions to power and network service throughout the restoration process, according to Loyola officials.
At the Weinberg Housing and Resource Center in Baltimore, which Catholic Charities began operating in July, 60 temporary beds have been added to the typical 275 because of cold weather.
The agency supplied a staff member and additional resources Jan. 6 to a temporary overnight shelter the city opened at 210 Guilford Ave., a site that once housed the Weinberg Housing and Resource Center. The site will remain open during the Code Blue, which is scheduled to end Jan. 8.
Not all homeless people want to stay in the emergency shelters. Behavioral health issues, resistance to rule following and other issues can compel people not to accept assistance, O’Donnell said.
“A lot of individuals do not like living in these large environments with a lot of people in very close proximity,” she said. “I don’t know how many people still slept outside last night.”
The cold snap means more homeless people may use Catholic Charities’ programs, providing an opportunity for the agency to connect them with long-term resources, O’Donnell said.
“We hope that’s part of what we can do,” she said. “Sometimes we’re successful, and sometimes people are just more concerned about staying warm and getting something to eat. I always find it to be an opportunity, and you never know what’s going to come out on the other end.”
Western Maryland temperatures fell far below those in Baltimore Jan. 7. The Weather Channel website described Cumberland’s weather as “bitterly cold” this morning, with a “feels like” temperature of 22 degrees below zero.
Frances Callis, Catholic Charities’ director of Community Services in Allegany and Garrett counties, said the counties have organized warming stations for people who need to get out of the cold.
Allegany County has two homeless shelters; Garrett County has none. Churches and charitable organizations help homeless people find temporary shelter, but the efforts are piecemeal, Callis said. Not all people who would benefit from the warming centers have access to transportation, she said.
Schools in Allegany and Garrett counties, including Bishop Walsh School in Cumberland, were closed Jan. 7. Schools elsewhere, including St. Joseph School in Cockeysville, had late starts.
Cancelled airline flights stranded members of Archbishop Spalding High School’s varsity basketball team in Alaska Jan. 5 and then Denver Jan. 6. The Severn-based team was on its way home from a tournament in Wasilla, Alaska, and is expected to return to Baltimore by late Wednesday night. Spalding games scheduled for Jan. 7 against Loyola Blakefield and Jan. 8 against The John Carroll School have been postponed.
“With the winter sports, you always realize when their schedules come out they’re going to be changed because there’s going to be snow and stuff’s going to happen. That’s how we’re treating it – basically like a snowstorm,” said Jeff Parsons, Spalding’s athletic director.
Both Wasilla and Denver were warmer than Baltimore Jan. 7.
Catholic Charities is accepting donations of food, blankets and financial assistance. To donate, contact Brandon Williams at the Weinberg Housing and Resource Center at 443-478-3777, extension 404.
Also see:
Renovated St. Agnes Chapel sparkles
Pope: Jesus helps people make right choice in ‘flea market’ of desires
PrevNext