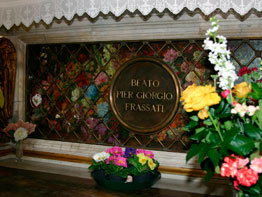 ROME (CNS) — Logistical details are being finalized in an attempt to fly the body of Blessed Pier Giorgio Frassati to Sydney, Australia, for veneration by young people at World Youth Day in July.

Among Italian young people and a growing number of their peers around the world, Blessed Pier Giorgio, who died in 1925 at the age of 24, is seen as a special patron because he combined his enjoyment of life and sports with strong faith, serious charity and a commitment to social justice.

In a service combining prayer and church legal procedures, Blessed Pier Giorgio’s tomb in the cathedral of Turin, Italy, was opened March 3, said Father Livio Demarie, spokesman for the Archdiocese of Turin.

Both the tomb of Blessed Pier Giorgio and the Shroud of Turin are venerated in the Turin cathedral.

Father Demarie said the only thing the archdiocese had to say was that the exhumation of the body was necessary so the archdiocese could take steps to better preserve it.

“Everything was done in agreement with the family,” he said.

The family and the Italian bishops’ office for youth are involved in the plans to transport the remains to Sydney.

Father Nicolo Anselmi, director of the youth office, told Catholic News Service March 7 that “it is true” that planning the transport is at an advanced stage.

While admiring a saint or beatified person and praying for that person’s intercession can be done anywhere and anytime, he said, having a relic or the mortal remains “helps us pray. It leads people to get to know the blessed or saint better. You know he is close to you.”

Wanda Gawronska, Blessed Pier Giorgio’s niece, told CNS she was certain that her uncle’s remains would be part of World Youth Day.

“It is beautiful. It is something splendid,” she said.

The Vatican Congregation for Saints’ Causes must give final approval to the plan, she said, but she expects the congregation to do so.

Gawronska said the planning also includes ensuring the safety and dignified handling of the coffin during its transport, as well as complying with international and Australian health regulations concerning the transportation of human remains.

She said young people identify with her uncle “because they have the same problems, desires and interests he had. They see him more as a companion and a friend than as an authority.”

Christine Wohar, executive director of FrassatiUSA, was visiting Gawronska when news broke about the plans to transfer the body.

She told CNS she realized people outside Europe might find the idea a bit strange at first, only because “we do not really have an opportunity in the United States to venerate the remains of saints. Here in Rome, there is one in almost every church.”

“To me, this is an incredible opportunity,” she said.

“People who know Pier Giorgio love him. It is not a casual relationship; they really love him,” Wohar said. “It will be a comfort and special gift to have him at World Youth Day.”