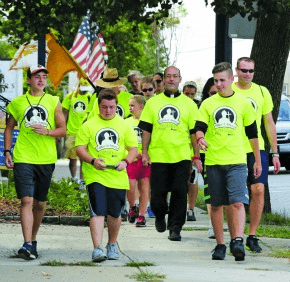 By Paul McMullen
pmcmullen@CatholicReview.org
Twitter: @ReviewMcMullen
Paula Tiller was 13 in 1978 when she attended her first national March for Life. This was not a simple hour-long bus ride to Washington, D.C., but seven hours each way in a caravan from upstate New York.
She will return to the National Mall Jan. 22, with her current parish, St. Peter in Hancock, and attempt to connect there with the Christiana Homeschool Academy in Westminster, combining several of her favorite causes.
“Other than for a pregnancy, I’ve never missed one,” Tiller said of the March.
That is not a perfect record of attendance, as Tiller and her husband, Paul, are the parents of 10, ages 10 to 31.
The narcissism of some peers manifested itself in the Me Generation; the Tillers, staunchly pro-life, nurture their own “We Generation.”
“We wanted to be open to life, and open to God’s will as a family,” Paula said, when asked about the size of their brood. “If we accept the challenges He sent us, he would send us the means and patience and everything we need.”
God indeed has provided to the Tiller family both the means and the patience – and the challenges.

Left: the 10 Tiller children pause with their parents at their Clear Spring home on Thanksgiving Day in 2012; standing, from left, Edmund, James and Paul Jr.; seated, middle row, from left, Kateri, parents Paul and Paula, and Natalie; seated, front row, from left, Danielle, Bernadette, Philomena, Theresa and Elizabeth. Facing page, top: Edmund Tiller, 17, second from right, flanks Father John J. Lombardi as they near Philadelphia Sept. 26. He was one of five members of the Tiller family on the Feet for Francis pilgrimage. (Courtesy Tiller Family)

High school sweethearts
Paul Tiller is one of six, his wife one of eight. They were high school sweethearts in Verona, N.Y., 35 miles east of Syracuse. Paul wrestled and played trumpet in the marching band, and Paula played field hockey and the cello in the orchestra. They also saw plenty of each other at Our Lady of Good Counsel Parish, where the mission statement includes the following:

“Our liturgical music is truly sacred music, drawn from the rich treasury of the Church’s heritage. … We take our obligation seriously to defend the unborn, the dying and the sanctity of marriage.”

Feet for Francis brings $12K in scholarships to Baltimore archdiocese

Why I am pro-life