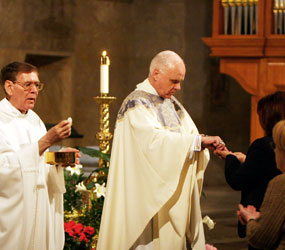 WASHINGTON, D.C. – Margaret Maringa has visited the Basilica of the National Shrine of the Immaculate Conception many times, but there was something special about doing it with other pilgrims from the Archdiocese of Baltimore May 7.

“It carries much more weight because it shows that you are part of the whole church – not just yourself,” said Maringa, a parishioner of Our Lady of Perpetual Help in Ellicott City.

Maringa was one of about 75 people from the Baltimore archdiocese who participated in the 2011 pilgrimage, a spiritual event held every other year.

Archbishop Edwin F. O’Brien led the gathering, offering a spiritual reflection in the morning and then celebrating an afternoon Mass in the basilica’s crypt church. The pilgrimage’s theme was the “Many Faces of Mary,” and participants visited and prayed in the dozens of chapels and oratories dedicated to the Blessed Virgin Mary. International devotion to Christ’s mother was evident in the many different depictions of Mary, ranging from Mexico’s Our Lady of Guadalupe, Poland’s Our Lady of Czestochowa to Germany’s Our Lady of Altotting.

Maringa, an immigrant from Kenya, was moved by the Our Mother of Africa chapel, which includes a bas relief depicting the history of African Americans from slavery through civil rights.

“It was most profound,” said Maringa, wearing blue and white traditional African garb. “We understand slavery as a sin that needs to be confessed. The truth is, we are all guilty. My kinsmen sold Africans into slavery. I asked Our Mother of Africa to take care of the descendants of slaves and enhance our spiritual repentance in all of us.”

In a reflection given during adoration of the Blessed Sacrament, Father Jesse Bolger said Christ entrusted Mary to the whole world. Regardless of her “many faces,” he said, the various cultural expressions of Mary have the common themes of a call to conversion, living out one’s vocation as a disciple of Christ and an encouragement to be courageous in the practice of the faith.

“Mary is always directing us to her son,” said Father Bolger, associate pastor of Holy Trinity, Church of the Crucifixion and Church of the Good Shepherd in Glen Burnie.

Lorraine Blake, a parishioner of St. Gregory the Great in Baltimore, went to confession during the pilgrimage and called the gathering a “very special” day.

“Seeing all the chapels gives you a good feeling and shows you how the Blessed Mother loved all of us,” she said.

Father Damien Nalepa, St. Gregory’s pastor, brought 10 parishioners from St. Gregory and two from St. Peter Claver on the pilgrimage. It was the third time his parish participated in the event.

“They were just overwhelmed by the beauty of the place,” he said. “So many had not seen it before.”

Kneeling in a replica of France’s grotto of Our Lady of Lourdes, many pilgrims prayed the rosary. Illuminated by flickering candles, the grotto offered a meditative atmosphere and an almost other-worldly presence.

In his homily at the closing Mass, Archbishop O’Brien said Catholics of the Baltimore archdiocese have a special claim on the Washington basilica – the largest church of the Western hemisphere and the eighth largest church in the world. The basilica was conceived by the fathers of the Sixth Provincial Council meeting in Baltimore in 1846 at the Basilica of the National Shrine of the Assumption of the Blessed Virgin Mary. The church’s cornerstone was laid in 1920 by Baltimore’s Cardinal James Gibbons. Until 1947, when Washington became a separate archdiocese, construction and pastoral care of the shrine was entrusted to the archbishops of Baltimore.

No human being has ever or will ever experience Jesus as has Mary, Archbishop O’Brien said.

“Mary is truly the first church,” he said, “in theological language, the prototype of every church.”

For nine months, he said, Mary provided Christ a home beneath her beating heart. She was the first disciple, she was with her son from Bethlehem to Calvary, and she received him in the Eucharist.

“May she, the woman of the Eucharist, school each of us in the hidden treasures that await us both on this altar and at the heavenly banquet to come,” Archbishop O’Brien said.