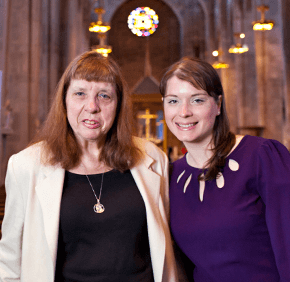 By Paul McMullen
pmcmullen@CatholicReview.org
Twitter@ReviewMcMullen
One pilgrim remains moved by a vivid encounter her daughter had in St. Peter’s Square.
Another travels in memory of her mother.
All are inspired by the example of Blessed John XXIII and Blessed John Paul II, the pontiffs they will see canonized in Rome April 27, the highlight of a 9-day pilgrimage sponsored by the Archdiocese of Baltimore and Catholic Review Media.
Monsignor Robert J. Jaskot, pastor of Holy Family Catholic Community in Middletown, will serve as spiritual director for a 29-person contingent that will be on the road April 21-29. Pilgrims will spend two nights in Assisi and five in Rome, where Monsignor Jaskot did part of his seminary studies at the Pontifical North American College.
The pilgrims will celebrate Mass daily, tour St. Peter’s Basilica and be part of a gathering that is expected to exceed what some estimated at 4 million who were in Rome in April 2005 for the funeral of John Paul II.
Rosemary Koontz, one of the pilgrims from Baltimore, can attest to the passion he inspired, particularly in his native Poland.
She lived with her family in the mid- to late-1990s to the south, in Naples, where her husband, Howard, was an officer in the U.S. Navy’s nursing corps. After their daughter, Elizabeth Ann, now 30, took her first Communion, they took her and some of her classmates to Vatican City, where she came face to face with Pope John Paul II.
“It was June 5, 1996, after the pope’s general audience,” Koontz said.
As her husband described it, after some in their party grew weary and retired to their tour bus, they sidled up to some of the faithful from Poland, who were chanting in the pope’s native tongue. The pope came to the group, and Elizabeth Ann and two of her schoolmates received his blessing.
Koontz notes that the pilgrimage coincides with the 225th anniversary of the establishment of the Archdiocese of Baltimore, and includes locations pertinent to its history – such as Santa Maria in Trastavere (St. Mary’s Across the Tiber), where Cardinal James Gibbons made a prescient address about religious freedom in 1887.
Koontz, a parishioner of the Cathedral of Mary Our Queen in Homeland who converted to the Catholic faith in 1974, said that she continues to learn about God’s mercy.
“Pope Francis, John Paul II, John XXII,” she said, “all those popes emphasize God’s mercy.”
Pope Francis, the first Jesuit pope, took his name from St. Francis of Assisi. In the town of the saint’s birth, Monsignor Jaskot will celebrate an opening Mass for the pilgrimage in the chapel at the Basilica of St. Francis, one of the most revered shrines in Christianity.
While Koontz remembers her daughter’s encounter with a soon-to-be saint, Sheila Walsh’s participation in the pilgrimage is rooted in her late mother and a Marian devotion.
Her mother, Margaret Burch Walsh, died 15 years ago, on April 14, 1999. Walsh said she wasn’t expected to live as long as she did.
“She had a tumor on her lungs, and my brother came in from Alaska,” Walsh said. “She awoke and said, ‘Who is the beautiful woman at the foot of my bed?’ My brother and I weren’t seeing the woman.
“When she had that experience, her countenance improved. It was as if the Blessed Mother said, I’ll ‘give you a month with your son.’ She got out of bed and said, ‘Now, let’s go visit with some people who are sick.’ ”
Walsh graduated from Mount de Sales Academy in Catonsville in 1963, within days of the death of Pope John XXIII. After a divorce, she did not participate in the Mass for two decades, but said her mother’s example “brought me back to the church.”
Walsh is a parishioner of the Catholic Community of St. Francis Xavier in Hunt Valley, but for eight days, she will walk in the footsteps of saints.