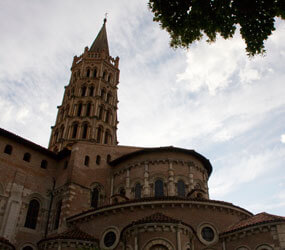 TOULOUSE, France – With sore feet and stiff shoulders, Dominic Jacques entered Toulouse’s St. Sernin Basilica like so many before him: wearing a heavy pack on his back, a white scallop shell on his side, and a look of wonder on his face.

In his hands was a credential, a passport for pilgrims on the trail to Santiago de Compostela, Spain. The worn and folded pamphlet contained page after page of colorful stamps from all the places he has been during his three-week long pilgrimage to one of Catholicism’s holiest sites.

The apostle St. James the Greater – Santiago in Spanish, St. Jacques in French – evangelized the Iberian Peninsula, and his remains can be found in Santiago de Compostela. The Way of St. James, or Camino de Santiago, is actually multiple routes leading to the city that welcomes Catholics like Jacques from all over the world.

The Way of St. James originally was intended as a substitute for Catholics unable to complete the pilgrimage to Jerusalem during the Crusades. In modern times, thousands of people each year have made the pilgrimage wearing the white scallop shell that has become synonymous with the trail.

Jacques, 36, grew up as an altar boy and avid hiker in the suburbs around Montreal. The experienced hiker has completed the nearly 2,200-mile Appalachian Trail and the 2,650-mile Pacific Crest Trail, both in the United States. He never considered hiking the Way of St. James until this year.

With a big smile and a thick French-Canadian accent, Jacques told Catholic News Service: “This year I wanted to hike the Pacific Crest Trail again. I’m here not by my own will, but because I opened my mind and listened to something beyond my willingness.”

He began his journey in Claviere, Italy, roughly 1,000 miles from Santiago de Compostela. Sacred places such as St. Sernin Basilica provided the background for his spiritual quest.

While other Romanesque basilicas in Europe were torn down during the last millennium in favor of the Gothic style, much of St. Sernin is original. It was built between the 11th and 12th centuries to honor the martyred St. Saturninus – Sernin is the French name for Toulouse’s first bishop.

Made of red brick and white stone, the basilica rises sharply over clay-tiled houses just north of the city center. With an exceptionally high vaulted nave, a five-tiered spire and a radiating apse, St. Sernin is one of the largest Romanesque churches in the world.

Arriving during the Middle Ages, pilgrims such as Jacques would have spent the night at the basilica, sleeping above the apse on the floor of the church’s curling ambulatory.

Down the street, in the shadow of St. Sernin, La Petite Auberge de Compostelle, one of countless hostels along the Way of St. James, provides shelter to pilgrims. In a room full of wooden bunks and diverse languages, Jacques showed his companions a recent purchase: “They’re the Asics GT-2150: breathable, ultra-light, with support for the arch. They are running shoes, but for hiking on the road, they’re perfect.”

For Jacques and other pilgrims making the journey to Santiago de Compostela, 2010 marks a holy year. This occurs when the feast of St. James, July 25, falls on a Sunday. Those who make the journey in 2010 – a minimum of 62 miles on foot or 124 miles by bike – receive a plenary indulgence, which promises escape from the temporal punishment the pilgrim deserves for sins committed and forgiven.

To mark the holy year, Pope Benedict XVI will visit Santiago de Compostela Nov. 6 as part of a two-day visit to Spain.

Father Vincent Gallois, a priest at St. Sernin, said places such as his basilica play an essential role on the Way of St. James. He explained that among the famous site along the route, a great community has formed.

“Upon leaving his homeland, the pilgrim finds a spiritual community that transcends time because it exceeds the borders,” he said. “The pilgrim who shares his journey with pilgrims of all countries clearly discovers on his journey a celestial city that accompanies him and supports him.”

Jacques has experienced this camaraderie firsthand. He met a number of new friends along the route and, as he entered Toulouse, was hiking with two other pilgrims.

“Most people, they want to do something (where) they’re going to realize themselves by hiking in the fraternity with other people, in friendship with other hikers,” he said.

Artur Bury, a 30-year-old Swiss Catholic of Polish descent, said he viewed the Way of St. James as an evolving spiritual experience.

“It’s not like you have 30 minutes sitting and someone tells you something; you have all the time to think on the Camino,” he said.

With more than 800 miles to his destination, Jacques told CNS, “By hiking, I make sense of my life.”

“Sometimes you get to a point in your life where you have to choose,” he told CNS. “For me, I’m very happy to do the Camino, to find out which direction I will continue my life.”

“Hiking or walking is more about a spiritual thing that you discover for yourself,” he added.