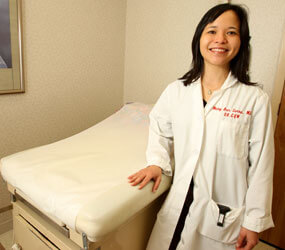 Dispensing birth control had been a regular part of Dr. Mary Ann Sorra’s gynecological practice for eight years.
Not anymore.

After a lot of prayer and discernment, the Catholic doctor embraced a fully pro-life practice about a year ago. She stopped giving out contraceptives and has been working to promote the pro-life message among her patients.

It was one of the most difficult decisions Sorra ever made, but one she believes is in keeping with what God wants of her and her medical outreach.

“I do believe that God was certainly calling me to do this,” she said. “I don’t believe you can be happy unless you do what God is telling you to do. He’s the author of our happiness.”

Early in her practice, Sorra viewed the distribution of birth control strictly as a healthcare issue. Besides, she argued, if she didn’t supply it, someone else would.

“It was what I thought was the standard of care,” remembered the 38-year-old parishioner of Church of the Immaculate Conception in Towson. “We’re trained to think that birth control was important and good for women – that it prevents unwanted pregnancies, decreases abortions and provides fertility control.”

In the back of her mind, however, Sorra struggled with reconciling her church’s teachings and her actions in her medical practice. Late last year, while attending a spiritual retreat in Emmitsburg, she asked a priest about the morality of distributing birth control. In no uncertain terms, he told her it was “absolutely morally wrong.”

Yet, other priests had suggested it might be considered the lesser of two evils – that birth control would be a better option than abortion.

Sorra prayed on it and then made an appointment to meet with Archbishop Edwin F. O’Brien. In the meeting, the archbishop helped clarify the church’s teaching against artificial contraception.

“I’ve worked with the Catholic Medical Association as chaplain and episcopal adviser over the years on this matter,” Archbishop O’Brien said. “Once they get into it and study it and are open with God’s grace to the Church’s teachings, it’s a new day for them.”

The archbishop noted that if Catholic doctors believe artificial contraception to be an immoral practice, it would be “nonsensical” and “immoral” for them to encourage women and couples to use it.

Sorra stopped giving out birth control, transforming her Pikesville practice into what she believes is one of only a handful of gynecological practices in the region that don’t distribute artificial contraception.
Some patients left in anger, but she picked up 100 new ones.

After studying the issue more closely and delving into Pope John Paul II’s Theology of the Body, which examines the theological underpinnings of human sexuality, Sorra came to recognize the soundness of the Church’s position.

Sorra, who encourages natural family planning, noted that sex is meant to unify a married couple and bring new life into the world. It’s part of God’s plan, she said.

Sorra said she has the peace of knowing she’s doing the right thing. She encouraged other Catholic gynecologists to “take a leap of faith.”

“Seek God and what his will is for us,” she said. “It’s important to open our hearts and listen to his will.”