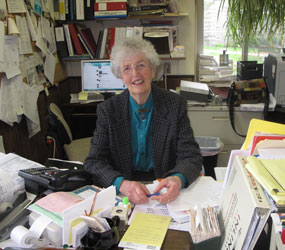 In honor of “Administrative Professionals Day,” April 27, The Catholic Review spotlights one of the many stellar administrative assistants of the Archdiocese of Baltimore.

PIKESVILLE – Christopher Welsh, pastoral associate of St. Charles Borromeo, calls her the “rock that we cling to no matter what storms are raging.”

For nearly four decades, Margaret Cassady has served as the administrative assistant of the Pikesville faith community. For several years before that, she was the secretary of the now-closed parish school and one of the volunteer physical education instructors.

While St. Charles has seen six pastoral leaders during her tenure – four priests and two pastoral life directors – along with a changing demographic base, Cassady has been the constant presence through it all.

“She’s one of those foundational figures that become almost as permanent as the structures that we worship in,” Welsh said.

For the last several years, Cassady has worked part-time in the office Monday through Wednesday. She answers phones, helps with the bulletins, welcomes people at the door, puts those in need in touch with the St. Vincent de Paul Society and keeps up the parish records.

“I love the people,” said the 75-year-old mother of six. “We just meet a lot of nice people and it’s really enjoyable. We see them in sad times and we see them in happy times.”

Cassady remembered that among the many visitors to the parish have been numerous Baltimore Orioles and Colts. Monsignor Martin A. Schwalenberg Jr., former St. Charles pastor and chaplain to the Orioles, arranged for the likes of Brooks Robinson, Andy Etchebarren, Alan Ameche and Artie Donovan to give out athletic awards and speak at the end of every school year.

“It was a really nice thing,” Cassady recalled.

Monsignor Lloyd Aiken, current pastor, said the 670-family parish relies on Cassady for much more than her administrative skills.

“Margaret is the one who can give the living history of the parish,” said Monsignor Aiken. “She’s just a very faithful and faith-filled person.”

Cassady has witnessed many changes in the parish. She wrote by hand on cards to maintain records when she first started in the parish office and now helps keep up a computerized parish database. The size of the parish has shrunk nearly in half from about 1,200 in the late 1960s. The community has also become more diverse – welcoming Nigerian, Hispanic, African-American and Filipino families in the last decade.

“Margaret is one of those figures who makes both the new and the longtime parishioners feel welcome,” Welsh said. “She’s really Christ-like in that welcoming sense.”

Welsh noted that although the administrative assistant could be long retired, she chooses to stay active. He called his colleague “the most kind, dignified and even-keeled person” he’s ever worked with.

“She loves this particular parish so much that she’s going to keep going until God has other plans for her,” he said.