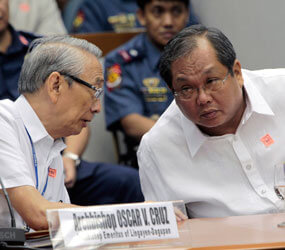 The Asian church news agency UCA News said provincial officials expressed indignation against the bishop in a manifesto published as a paid advertisement in The Philippine Star, a national daily, Sept. 23.

“We agree that anybody who malevolently attempts to destroy the credibility of the governor and endeavors to divert his attention from excellently performing his task of steering the province toward progress and development should be declared as persona non grata in the province of Pangasinan,” read the statement signed by 16 officials.

Archbishop Cruz is a canon lawyer and former head of the Archdiocese of Lingayen-Dagupan, based in Pangasinan. On Sept. 21, he submitted to the Senate Blue Ribbon Committee a list of officials receiving payoffs from gambling operators. The list was compiled by People’s Crusade Against Jueteng, a group he co-founded.

“We despise the inclusion of Gov. (Amado) Espino’s name in the list of jueteng operators provided by retired Archbishop Cruz,” the Pangasinan officials said in the advertisement. They displayed photos of Espino’s projects and conveyed their “displeasure” over Archbishop Cruz’s “patently biased and utterly speculative accusations” linking Espino to jueteng.

Archbishop Cruz, meanwhile, confirmed that he has been receiving death threats because of his campaign. While admitting he fears for his life, he declined offers of reinforced security from the Senate.

“There are about 12 dioceses we are looking at, but we are certain about eight,” he said.

He refused to name the dioceses, saying he is no longer an active member of the bishops’ conference.