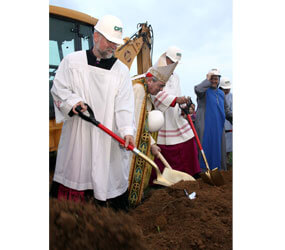 AVONDALE, Pa. – The Philadelphia Archdiocese has established a national parish to serve the needs of Spanish-speaking Catholics and celebrate their Hispanic heritage, according to an announcement by Cardinal Justin Rigali of Philadelphia.

It is St. Rocco Parish in Avondale in southern Chester County, where a large number of Latinos have moved in recent years. It will be the 32nd national parish in the Archdiocese of Philadelphia and the first to be designated for Hispanics.

National parishes serve particular ethnic communities, as opposed to territorial parishes, which serve a geographic area of an archdiocese or a diocese.

Cardinal Rigali made the announcement about St. Rocco Oct. 12, the feast of Our Lady of Pilar, patroness of Spain.

“The non-Spanish-speaking parishes do not have the resources and language skills necessary to serve the Spanish-speaking people in the area,” he said. “Therefore, the religious traditions and needs of the Hispanic people of southern Chester County are best served by sharing a common parish.”

On Aug. 16, the feast day of St. Rocco, the cardinal dedicated a new St. Rocco Mission Center and blessed the ground on which a new church will be built. It will be constructed in the style of Mexican architecture with a plaza entrance. Once completed the church building will seat 500 people.

Approximately 85 percent of the Spanish-speaking people in that part of Chester County served by St. Rocco are Mexican, but also include Puerto Ricans, Colombians and Argentines.

“This new parish church will give these communities the accommodations to fully participate in their traditional celebrations,” said Monsignor Francis Depman, named pastor of St. Rocco Parish by Cardinal Rigali, also Oct. 12.

He is chaplain of Mision Santa Maria, Madre de Dios, the archdiocese’s outreach to Hispanics in Chester County.

“The feast of Our Lady of Guadalupe (Dec. 12) is traditionally a 12-day celebration in Mexico, and now that we won’t have to borrow the space of another church for a couple hours, the colorful decorations of the celebration will be allowed to stay up throughout,” said the priest.

“Everyone here is very excited and looking forward to the completion of the church, so they will finally have a place to worship that they can call home,” Monsignor Depman told The Catholic Standard & Times, newspaper of the Philadelphia Archdiocese.