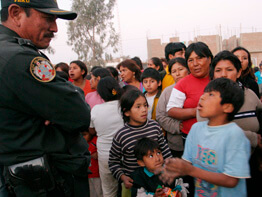 ICA, Peru – The evening before his 12th birthday, Denis Sulca stood near the end of a line of more than 100 children, hoping for a ration of milk. Eight days earlier, Aug. 15, a magnitude 8 earthquake destroyed the adobe house where his family lived in a shantytown in this city of about 300,000 people on Peru’s southern coast.
“We’re sleeping in a tent in the street,” said Denis, the oldest of six children. “My little brothers are sick.”
Three minutes of violent tremors shattered the dreams of tens of thousands of families who have migrated from the Andes Mountains to Ica and the neighboring towns of Pisco and Chincha over the past two decades in search of jobs and an education for their children. Some lost family members in the earthquake, which killed at least 530 people. Those who escaped harm as the adobe walls and ceilings of their homes crumbled must now start over.
“People are putting a lot of hope in the aid promised by the government,” said Father Victor Cupe, whose parish spans Parcona, a district of 40,000 people that includes a sprawling shantytown and scattered rural communities.
President Allen Garcia has promised vouchers worth about $1,900 to families whose homes were destroyed in the quake. While some people in Father Cupe’s parish have gone to live with relatives, many others are camped out in tents in front of what remains of their homes. Since the earthquake, they have spent their days helping each other clear away the rubble.
Bishop Guido Brena Lopez of Ica has accompanied his flock through droughts, floods and earth tremors in his nearly 34 years in the diocese, but never expected a disaster like the earthquake that struck on the feast of the Assumption of the Blessed Virgin Mary.
“It went on for so long that I thought my life was over,” he said. “At the same time, I thought of the entire diocese. The lights went out. I couldn’t see anything, but I knew that many things had happened.”
His fears were confirmed when he turned on the radio and learned that the epicenter of the huge quake was near Pisco, about 42 miles north of Ica.
“That was when I began to realize the magnitude of the destruction,” he said.
Residents of Pisco, Ica and Chincha are slowly trying to put the disaster behind them. They have buried the dead, the most seriously injured have been evacuated to hospitals in Lima, the Peruvian capital, and emergency shelters are providing food and medical care.
Most of the aid, however, is being distributed in the towns’ central plazas. On the periphery and in the countryside, where most houses are precarious structures built of bricks made by hand and dried in the sun, there is still a sense of desperation.
At a makeshift warehouse in a Catholic school on the outskirts of the city, Father Marco Martinez was overseeing the distribution of truckloads of supplies arriving from the national Caritas office in Lima – the local affiliate of the Caritas Internationalis Catholic network of charities – and other dioceses around the country that have taken up collections for the earthquake victims.
So far, about a dozen trucks have arrived, each carrying about 15 tons of supplies.
For a day or two after the disaster, the greatest need was for warm clothes and blankets for the people who had lost their homes and were sleeping in the street or plazas, he said, but now the most critical need is food.
When a truck arrives, he calls each pastor to collect his parish’s rations.
Immediately after the earthquake, every pastor drew up a list of families whose homes had been lost or damaged. Groups of families organized to cook meals in a common pot with beans, lentils, rice, noodles and other food items provided by the church.
Distributing the food to organized groups instead of handing it out to individual families ensures that it gets to those who need it most, said Father Walter Avalos, the pastor of two parishes where more than 100 groups of families are receiving food to cook together.
Father Cupe said the parish network is more efficient than the government-run distribution system, which was not well organized.
That was evident in Denis’ neighborhood. While he waited for milk Aug. 23, a line of adults, mostly women, snaked around the block. Government emergency workers handed out mattresses, water, blankets and other goods from a tractor-trailer, but it seemed unlikely that there would be enough to go around.
Several women waiting in line said it was the first time a truck had been sent to their neighborhood. They did not know what items they would receive but hoped for food. To ensure that no one went through the line twice, police used felt-tipped pens to mark numbers on their arms – the same system used to keep track of visitors in Peruvian prisons.
“You see people in the plazas, outside government offices, clamoring for assistance,” Father Cupe said. Although people know the parishes are receiving supplies, “You don’t see anyone outside the parish offices, because they know the food will reach them,” he said. “Even if it’s just a little, people are happy because they know someone cares about them.”
Although food and emergency shelter will be the priorities for several weeks, Bishop Brena and Father Martinez are already planning their next step. As people return to work, the need for emergency rations will taper off, but elderly people and the poorest families will have a hard time rebuilding their lives.
They will need long-term assistance, “but we don’t want to create dependence,” Bishop Brena said.
He takes heart from both his faith and the people’s resilience.
“They tell me, ‘We’re not going to cry. We may be a little afraid, but we have to get back on our feet,’“ he said.