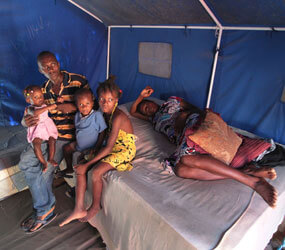 PORT-AU-PRINCE, Haiti – It took more than a year, but Gregoire Jean has his wife and five kids back at home.

They are back in their own beds, surrounded by the familiar: the family room with the dining table covered by the white and orange tablecloth; a wooden hutch filled with plates, cups and other necessities; the lace curtains that filter the bright sun; the store in a tiny anteroom from where Jean’s wife sells canned goods and household items.

Still, Jean is not so sure that the cramped two-room concrete block house that he built in the Delmas 33 neighborhood is the best place for the family to be.

“I fear the earthquake,” he said, recalling the violent shaking he and his family felt during the January 2010 temblor. It sent the neatly stacked cans of goods from his wife’s business flying in all directions but spared the house of any significant damage. “I felt more comfortable under the tent.”

For 14 months, Jean favored the tight quarters of a tent pitched on the local soccer field in the Delmas 33 neighborhood a couple of blocks from his home. The family shared the field with hundreds of other families, the vast majority of whom lost their homes. At least at the field, he reasoned, there was no chance of being crushed by falling debris should the earth start shaking again.

Jean relocated his family only at the urging of neighborhood leaders who wanted to get the local youth soccer league back into action.

Led by Tanis Pierre Michel, the leaders sympathized with the dozens of families remaining in the camp more than a year after the quake. Michel said the community did not want the field to become a permanent home for people, especially when some of the residents could afford a new place to rent, had homes that were livable or had friends or relatives willing to take them in.

“The park is a sports center for us. That’s where the people come for recreation,” Michel said, explaining how 2,000 or more youngsters play in organized soccer leagues during any given week. Without the outlet of soccer, he said, the kids were turning to other, not-so-pleasant, activities.

So the community banded together to help. With the support of a few staff members of the neighboring Matthew 25 House – which provides hospitality for short-term volunteers visiting Haiti through the Nashville, Tenn.,-based Parish Twinning Program of the Americas – Michel and the others identified places where people could move. They made sure those who lost the most in the quake could still obtain necessary aid and services. Those whose homes were intact but were staying in tents were urged to keep the needs of the broader community in mind. After several weeks, the field was ready to return to soccer use.

Michel, who oversees the soccer program, had no timeline for the return of competition. But at least with the field cleared, planning for a new soccer season could begin.

The story of recovery – albeit gradual – in Delmas 33 illustrates the difficulty Haiti faces as officials struggle to find homes for about 650,000 people who remain homeless after the quake. Even though some 850,000 people have been relocated, Haitian authorities have acknowledged there is not enough housing available for the vast majority of homeless people scattered throughout the battered earthquake zone.

Place the housing dilemma against the backdrop of a subdued, but not defeated, cholera epidemic that can explode again with little warning as the hurricane season looms, and the task ahead seems insurmountable.

Michel said he hopes what happened in Delmas 33 can inspire other communities to work together in the same way.

Father Abelhard Thomas, pastor of St. Garard Church in the St. Garard neighborhood across town, worries about his parishioners who continue to live under tarps and tents that were never meant to last as long as they have. Some have moved to other communities around Port-au-Prince and beyond, but the majority remain because they have nowhere else to go.

Parishioners continue to join the celebration of Mass in an outdoor amphitheater-like setting on a rocky hill just below the devastated church. Parishioners’ faith remains strong, Father Thomas explained, but some are wondering how much longer they will be without a home.

The young priest, who became pastor of the vibrant parish six months before the quake, said he visits as many families as possible to help lift their spirits.

One positive outcome for the parish is that UNICEF has built a temporary structure being used as the parish school, which collapsed during the quake, killing dozens. When classes resumed May 3, 2010, teachers and students met under tarps scattered around parish grounds.

Father Thomas acknowledged it will take more than such small victories for people to remain hopeful.

“Life is starting to go back to the usual,” he said. “But people’s means are very limited. Life in general is very difficult.”