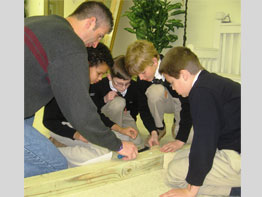 Woodmont Academy students in Cooksville devoted Martin Luther King Jr.’s birthday to a day of apostolic service, performing works that benefitted the school community and a school in El Salvador.

Sixth-, seventh- and eighth-grade boys visited the Therapeutic Recreational and Riding Center in Glenwood where they scraped, sanded and stained the floor of a 100-year-old barn which is being converted into a conference center and training facility.

Middle school girls entertained folks at several senior centers; fourth- and fifth-graders built outdoor Stations of the Cross markers to use on campus; and the younger children crafted rosaries for Woodmont’s sister school in El Salvador.

“Apostolic service is one of the four guiding themes of our school,” said Danny Flynn, director of formation. “We wanted to use an entire day to remind students … to be apostolic.”

The PreK-8 school uses a method of education developed by the Legionaries of Christ which endeavors to form a child’s whole self: intellect, faith, character and disposition toward service.

Under the direction of Mercy High School art teacher and alumna Melanie Coburn, the Baltimore school’s National Art Honor Society took a peek inside the world of working artists as they produced an off-campus art show in Hampden.

“Lucid Awakening” opened Jan. 5 at the Adornment Gallery and Craft Center through the month, featuring two- and three-dimensional works from Mercy students.

Katie Morris, an instructor at the Maryland Institute College of Art (MICA), selected the displayed pieces and said she was impressed with their overall quality.

Anoushe Shojae-Chaghorv, a senior; presented two works, one a coat crafted out of faux fur and metallic fabric. Both ideas draw on her Persian identity. As an American girl with an Iranian father, she said she has come to understand modern life in Iran.

Alison K. Barzyk, a 12-year-old parishioner of St. Isaac Jogues, Carney, voluntarily organized a winter coat and clothing drive for the homeless at My Sister’s Place, contacting the center independently and then arranging for the collection of more than 60 coats, 37 pairs of gloves, 32 hats and 18 scarves.

Alison’s family delivered the items to the facility, which ministers to homeless women and children.

“Our daughter’s expression of empathy for the homeless was not prompted by required community service hours or anything other than the goodness of her heart,” wrote Colleen O’Shea Barzyk in an e-mail to The Catholic Review.

Trinity School sixth-grader Jack Finn nudged out his twin brother Mike Finn on a geography question, to win the Ellicott City’s school competition of the National Geographic Bee and a chance at a $25,000 college scholarship for the first-place national winner.

Jack will take a written test April 3 with other top scorers in each state. The National Geographic Society will provide an all-expenses-paid trip to Washington, D.C., for state champions to participate in the national championship May 19-20.

Six Baltimore Catholic school students out of 28 were essay winners in the Fox 45 WBFF- Baltimore Champions of Courage Black History Month contest as they saluted their black heroes.

“This is impressive,” said Courtney L. Gahagan, director of communications and an alumna of Mount de Sales, “considering the winners were chosen from a pool of 5,600 entries, representing 90 schools.”

The competition challenged students to write essays saluting their personal “champion of courage,” a positive role model who has touched their lives.

The Hunt Valley office of Susquehanna Bank has partnered with Calvert Hall College High School in Towson to bring a bit of color to its lobby. Students donated a selection of paintings on canvas and wood sculptures. By showcasing artwork from a variety of local schools and organizations, the bank hopes to bring attention to the diverse talent within the area.

Archbishop Fulton J. Sheen Knights of Columbus Council 7612 announced Jaclyn Hall, Anna Hohl and Drew Clack as the winners in a free-throw competition for boys and girls age 10-14, held at St. Joseph in Eldersburg. Winners were awarded basketballs and will advance to the district competition.

PEOPLE PLACES THINGS items for consideration should be e-mailed to ssingleton@catholicreview.org.