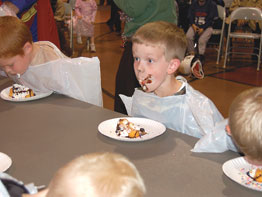 Cub Scout Pack 883, chartered to St. Joseph, Sykesville, held its annual Halloween party and pack meeting Oct. 24 where Cub Scouts received awards they earned for October. The boys participated in a Halloween costume contest and Halloween-themed games, including a Twinkie-eating contest in which the Scouts ate the cakes smothered with whipped cream, sprinkles, and chocolate syrup – without using their hands of course. The winner was Jared Fischer, a Tiger Cub.

For the fifth year, Sisters Academy of Baltimore has been blessed with a full-time volunteer from the Bon Secours Volunteer Ministry Program. This program provides a way for lay women and men to help people in need in Baltimore and other east coast cities. Volunteer Alicia Manteiga is teaching Life Skills to fifth-through eighth-graders.

Updates from the office of the Apostleship of the Sea ministry (AOS) include the welcome of newest ship visitors Charlie Hopkin and Don Douglas; and Mandira Almeida as the new office assistant. Cecilia Coffey and Jeannette Cherigas, both Legion of Mary members, will operate the clothing program and assemble bags containing crafts, magazines, and other items to distribute to seafarers emerging from visiting ships in Baltimore’s ports. The Knights of Columbus Father O’Neill Council will provide repaired bikes for the seafarers as well.

Monsignor John L. FitzGerald reported receiving an overwhelming response to a mailing announcing the death of Jesuit Brother Jim Horan in which AOS has collected more than $5,000 to memorialize The Brother Jim Horan S.J. Communication Center and its dedication wall.

Ascension School, Halethorpe, celebrated their annual Red Ribbon Week Oct. 24 as students wore red, decorated classroom doors, watched videos and participated in activities to celebrate being drug-free and to learn about the dangers of using drugs. The K-8 children also pitched in $60 in quarters to the Epoch Treatment Center, which will utilize it for teen outreach, reported Therese Conlon, school counselor.

“Caring for the Earth and Its People” was the theme of College of Notre Dame of Maryland’s annual Community Day held Oct. 24. The event celebrates the mission, history and heritage of the college’s founders – the School Sisters of Notre Dame – who mark their 175th anniversary. The keynote speaker was Dr. George Fisher, a faculty member at the Ecumenical Institute at St. Mary’s Seminary and University, Baltimore. Community Day began with a liturgy, and included workshops, dedication of the campus’ peace pole, and a reception honoring the sisters.

Etched on each side of the peace pole are the words, “Let peace prevail on earth” in four languages: English, Spanish, German, and Japanese.

The sixth-grade class of Trinity School, Ellicott City, joined the fight against childhood cancer by hosting an Alex’s Lemonade Stand on three consecutive Fridays in October in the school cafeteria. Just more than $1,000 in donations was collected for refreshing cups of lemonade during lunch period.

After learning of the story behind Alex’s Lemonade Stand, student Lauren Ridlon was touched to become involved and enlisted the help of her classmates, keeping with Trinity’s dedication to community service. Some class volunteers donated time and their allowances to the cause.

Alex’s Lemonade Stand Foundation was founded by 4-year-old cancer patient Alexandra “Alex” Scott (1996-2004) who felt compelled to set up a lemonade stand in her front yard to raise money to help find a cure for children’s cancer.

The foundation has evolved into a national fundraising movement which has raised more than $25 million.

The Mount established the Hall of Fame in 1983 to honor the achievements of student athletes from the school’s past. Nomination and selection procedures emphasize leadership, character, and athletic achievement.