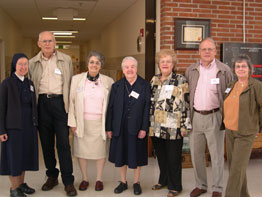 The 1957 graduating class of Mother Seton School in Emmitsburg recently reunited with classmates and fifth-grade teacher Sister Natalie McCubbin, a Daughter of Charity.

The first graduating class of the Emmitsburg school shared memories, laughs, lunch and a school tour at their recent reunion. For some, it was the first time at the school’s “new” location. In the winter of 1957 when these students attended Mother Seton, the school was located on South Seton Avenue – where the Emmitsburg Learning Center is now housed.

DJ Kramer and Connor Kipke, eighth-grade safeties at St. Jane Frances School, Pasadena, were placing orange cones on the parking lot one morning when they observed flames coming out of the top of the chimney on the school roof. They alerted assistant principal, Renee Hammond, who evacuated the building, and fire trucks arrived on the scene.

“The children knew exactly what to do,” said Mrs. Hammond, as the school community assembled in the church and prayed the rosary while firefighters investigated. “I especially want to commend the two eighth-grade safeties for alerting me.”

A new boiler had been installed previously, and the flames and smoke were the result of burnoff, with the potential to be a fire.

Kelsey Scott, a student at Monsignor Slade Catholic School, Glen Burnie, was one of the 24 winners of the Holy Childhood Association’s national Christmas Artwork Contest. Her artwork will be featured in a box of 24 cards on sale to benefit the organization. She and the other winners selected from around the country will be recognized in December at the Basilica of the National Shrine of the Immaculate Conception, Washington, D.C. To purchase cards, e-mail khellmuth@archbalt.org.

As part of their Day of the Dead lesson, middle school students in Susan Fredericks’ Spanish class at St. Pius X School, Rodgers Forge, constructed an altar in memory of the late Baltimore Colts player Johnny Unitas. The activity was based on the tradition in Mexico where people erect altars in their homes in honor of the deceased. Altars include mementos from the person’s life, favorite food, flowers and photos.

According to Ms. Fredericks, it is believed spirits return on All Souls Day to see if they are remembered.

“The altar is really amazing,” wrote Ms. Fredericks in an e-mail to The Catholic Review. “The kids made a miniature football field, a boy brought in a #19 jersey … and kids found a copy of one of his menus online.”

The Knights of Columbus of St. Francis of Assisi, Fulton, is sponsoring a Keep Christ in Christmas poster contest to remind the world of the reason for the season. Grades 1-8 are invited to participate; winners will advance to the state level competition.

The Catholic High School of Baltimore is promoting their 21 Club in a green and red postcard campaign announcing “Give the gift of money this Christmas!” A Jan. 12-Feb. 10, 2009 drawing gives purchasers 125 chances to win in a 21-day drawing with one ticket. A total of $15,000 in cash will be awarded. For more information, call Sister Margaret Lewis at 410.732.6200.

Mother Seton Academy is the only Catholic school in Baltimore invited to participate in the National Foundation for Teaching Entrepreneurship Program which provides entrepreneurship education programs to young people from low-income communities. Sixteen students will develop business plans with specific criteria to present to program reps and local entrepreneurs in the spring.

Eighth-graders at St. Michael the Archangel School, Overlea, planted on school and parish property 11 various types of trees donated by The Herring Run Watershed Association. “This enables us to be good stewardships of creation by maintaining green space,” said Corinna Sibiski, development director.

Through the Catholic Daughters of the Americas, children can receive a letter from Santa Claus postmarked from the North Pole. Mail child’s name and address and $3 to P.O. Box 5101, Annapolis, Md. 21403, payable to Court Annapolis #326. Requests must be received by Dec. 1. E-mail questions to catholicdaughters@comcast.net or call 410.349.6284.