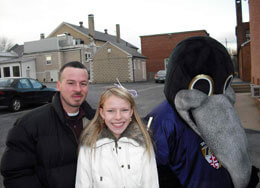 Students also donated Thanksgiving food items to be distributed to the underprivileged in the Rosedale community and sent school supplies for flood-ravaged schools in Haiti.

The Italian Club at Calvert Hall College High School, Towson, oversaw the creation of two bocce ball courts on their Towson campus. Built in six weeks by students and the maintenance staff, the courts cover an official 12×65 area made with crush and run (compacted mixture of rock, sand, pebbles, stone) and pulverized dust over soil.

Funding for the courts came from various sources, including $5,000 from Vince Piscopo, president of the American Italian Associated Charities. Additional private donations were secured and several school families donated the surrounding benches and scoreboards. Landscaping and a brick walkway will be added later.

Father Gerard Francik, class of 1978, and members of the Italian Club gathered for a Nov. 12 blessing and dedication; the club then played its inaugural match versus the school’s Irish Club. (After their defeat, the Italians are looking for a rematch.)

“I am proud of our accomplishments and know these two historic courts will continue our club’s mission and vision of creating a strong Italian-American community at Calvert Hall,” said Matthew Wohlfort, president of the school’s Italian Club, moderated by Mark Tosti of the foreign language department.

A team of cheerleaders from Our Lady of Mount Carmel High School, Essex, participated in Maryland Cheers for Our Troops with other cheerleading teams throughout Maryland and helped pack 100 care packages for troops overseas. The Thanksgiving goodies will be sent to Maryland National Guard troops stationed in Iraq.

The Catholic High School of Baltimore and Institute of Notre Dame, Baltimore, braved the 30-plus degree temperature on a Saturday morning to march in Baltimore’s Thanksgiving parade Nov. 22.

Dr. Mary O’Connor, assistant professor of nursing at College of Notre Dame of Maryland, Baltimore, has been named a fellow by the American College of Healthcare Executives. She is active in St. Paul Lutheran Church.

Also, four members of the nursing faculty of Notre Dame have received 2008 New Nursing Faculty Fellowships from the Maryland Higher Education Commission: Jane Balkam, Linda Diaconis, Aundrea McNeil and Mary Packard. Awards are made to new full-time nursing faculty members nominated by their deans or directors, providing each fellow with $20,000 over a three-year period for professional expenses or as a salary supplement.