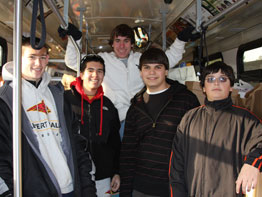 As part of an effort to celebrate St. Nicholas instead of the commercialized Santa Claus,

St. Dominic, Hamilton, hosted a lunch and visit from the saint Dec. 6 for the children and grandchildren of the parish.

“We like to make it an act centered on St. Nicholas and religion,” said Sister Marie Seton, a School Sister of Notre Dame who serves on the social committee. The children shared lunch, colored Nativity scenes, created art based on religious themes and received Advent activity books and stockings filled with items symbolic of the saint and what he did for people.

The hands-on engineering and biomedical sciences program will be available for the classes of 2012 and 2013, preparing students for college study and introducing potential careers in engineering and the medical field.

To be accepted into the program, students must demonstrate aptitude in mathematics and science, have excellent grades and receive recommendation by teachers.

Partners will provide speakers, mentoring, career shadowing, internships and assistance in locating grants and scholarships for students to study engineering and biomedical science in college.

After being silent since 2004, church bells at St. Ann, Hagerstown, again are ringing sweetly. When lightening struck the system, the bells were sent for repair; however, an ownership change in the bell company and the outdated electronics of St. Ann’s bell system caused the work never to be completed, according to Craig Kurtz, parish business manager.

Funds then became an issue as the focus switched to capital repairs on parish buildings.

“Monies were not available for St. Ann to purchase new bells,” wrote Mr. Kurtz in an email to The Catholic Review; however, the pastor, Father Doug Kenny, and parishioners much desired the sound.

One dedicated parishioner, Gene Manning, stepped up and offered to pay the entire price tag of a new bell system, in memory of his parents, Fred and Peggy Manning. A carillon was purchased from Schulmerich Carillons and installed in November.

“Now once again,” said Mr. Kurtz, “the parish community is blessed with the beautiful music of the bells.”

Fourth-graders of Junior Girl Scout Troop 4932 of Immaculate Conception School, Towson, did their part to stock shelves at a local food pantry after sponsoring a week-long food drive.

Hanlon Myers, a fourth-grade teacher and volunteer at Our Daily Bread, Baltimore, made a presentation to the troop, explaining how some people on limited incomes run out of money at month’s end to buy groceries.

Supported by the school’s principal, Madeline Meaney, the troop placed bins in the school lobby and publicized their effort with signs, fliers, e-mail, and via morning announcements.

The food drive ended Dec. 5; the Scouts delivered the items to CARES food pantry at St. Mary of the Assumption, Govans.

Dr. Dale Buchbinder, renowned vascular surgeon, has been named chairman of the department of surgery and medical director of perioperative services at Good Samaritan Hospital, Baltimore. Dr. Buchbinder previously served as chair of surgery for 18 years at GBMC.