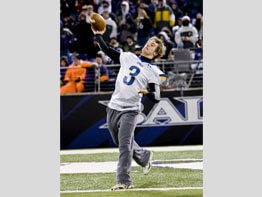 Three Loyola Blakefield, Towson, football players participated in the Baltimore Ravens Toyota Quarterback Challenge during halftime of the Ravens-Redskins game Dec. 7. Dons quarterback Connor Bruns and receivers Ryan Cullen and Vincent Snarski, all juniors, were able to triumph in the competition. Connor ran a 52-yard completion during the event, in which the winner was determined by the longest throw.
Loyola Blakefield was invited to participate in the challenge, held during every Ravens home game and featuring local high school quarterbacks.

Brother Zinfer ran the Friday night bingo fundraiser for 28 years, and raised one million dollars for Our Lady Of Fatima School, having served the parish community for 48 years. Mr. Romeo has been a parishioner since 1951; he stuffs the bulletins on Fridays and takes collection money to the bank.

Mrs. Tagliavio joined the parish in 1952; she has cleaned the church for many years, and cooked for the Christmas Bazaar for 30 years.

Mr. Reitz, a staple of the church for 50 years, offered advice for others who wish to make a parish successful.

“Don’t stand by and watch things happen,” he said. “Get involved and make them happen.”

At the awards ceremony, Father Kevin Milton, pastor, said Mr. Reitz “did everything but the cooking for the first 10 years of the Christmas bazaar.”

To date in the 2008-09 school year, Cristo Rey Jesuit High School, Baltimore, students have participated in 15 different volunteer opportunities, contributing more than 800 hours of service to the greater Baltimore community. Students have volunteered at Beans & Bread, St. Frances Academy Community Center, and others, cooking and serving meals to the homeless, preparing food for people suffering from cancer and HIV/AIDS, entertaining the elderly, and organizing a Halloween party for 1,000 children.

Cristo Rey students set a goal of completing more than 2,000 service hours by the end of the school year, displaying their commitment to the Jesuit tradition of becoming “men and women for others.”

Three Baltimore city parishes – New All Saints, St. Ann, and St. Bernardine – will participate in the annual Red Dress Sunday Feb. 8 in support of heart disease.
Sponsored by St. Agnes Hospital, CareFirst BlueCross/BlueShield, and Associated Black Charities, women throughout Maryland are encouraged to gather at Sunday Masses and services dressed in red to raise awareness of heart disease, the number one killer of women in the U.S.

More than 100 churches of all denominations are expected to participate. Free health screenings will be available at many of them, free to the public.

The youth group and friends of St. Michael, Poplar Springs, gathered to make 500 lunches for the underprivileged in Baltimore and Frederick Dec. 20, using donations from the parish.

Decorated Christmas cookies and notes were included in the packed lunch of a lunchmeat/cheese sandwich, snack, fruit cup, water and dessert. Lunches are delivered to Beacon House in Frederick and Beans and Bread in Baltimore; this monthly project is in its third year.

“It is an amazing sight to see this activity going on (that morning), and the sending forth of the food,” said Ted Burkhardt, coordinator for Youth Ministry.

A leadership team at Mercy Medical Center, Baltimore, participated in Holiday Mail for Heroes through American Red Cross, asking the public to send in cards to “any” soldier stationed overseas. Approximately 70 cards were decorated and personal messages written.

Items for consideration for PEOPLE PLACES THINGS should be emailed to ssingleton@catholicreview.org.