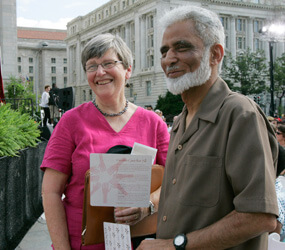 WASHINGTON – Washington’s sweltering heat did its best to discourage people of faith from gathering at Freedom Plaza to participate in the Interfaith Service of Witness and Prayer for Health Care for All June 24.

Regardless of the weather, nearly 1,000 people convened between the White House and the Capitol – armed with water bottles, umbrellas and matching paper fans bearing a message about reform – to ensure politicians hear their calls for universal health care.

Sister Simone Campbell, executive director of NETWORK, a national Catholic justice lobby, stood out from the crowd in a magenta dress and with her strong words in favor of health care change.

One of the final speakers, Sister Campbell was not the first one to make specific health care demands. She insisted health care must be affordable and accessible to all, inclusive and accountable to all, and of good quality for all.

Sister Campbell argued the time is now, saying the nation is aligned perfectly for changes in health care.

“In my experience it is rare when a moral stance, business necessity and political opportunity all coincide, but this is what we have now,” said Sister Campbell, a Sister of Social Service. “Faith and business are moving in the same direction. It is this confluence that brings us together this afternoon to make it known to our representatives that ‘we the people’ demand health care reform.”

Calling the situation a “business necessity,” she reminded the crowd of the wealth of America and pointed out the irony that one of the wealthiest nations in the world cannot afford to offer all its citizens realistic opportunities for health care.

She reminded the crowd of the healing touch of Christ and of the nation’s responsibility to leave no one “untouched.” Sister Campbell also suggested it may be time for business and free market plans to step aside from health care issues.

“The marketplace has failed in the delivery of health care. We as a nation were foolish to think that health care can run on a completely free market model,” Sister Campbell said. “Health care is a ministry – it is a faith-based action.”

Judging from the event, people of all different faiths seemed to be taking action.

The event brought many different beliefs and ideologies together. Those with the Gamaliel Foundation, an endorser of the gathering, wore red shirts marked with the slogan “Faith & Democracy.”

“The faith community is a fundamental pillar that needs to come together to get health care for all and health care is something that people can really unite around,” said Rachel Rosen DeGolia, director of the Universal Health Care Action Network founded in 1992.

She manned a booth which focused on developing resources to encourage dialogue between people of different faiths and also on giving people the skills to evaluate political proposals and ask questions of leaders.

The booth represented one of the endorsers of the interfaith program, Faithful Reform in Health Care, which recently branched off from the Universal Health Care Action Network.

DeGolia said she was encouraged by the number of people in the plaza but said health care reform was still a serious challenge. “We need major health care changes,” she told Catholic News Service. “We are hoping that our policymakers hear what we’re saying.”

Some of those same policymakers are busy developing proposals for health care change on Capitol Hill. There are at least half a dozen health-related proposals already before Congress. One is called the Affordable Health Choices Act, which is based in part on the plan Massachusetts has in effect and would require individuals to purchase health insurance except in hardship cases.