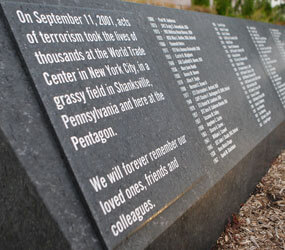 ARLINGTON, Va. – The Pentagon Memorial pays somber tribute to the 184 people who lost their lives at that spot 10 years ago, but it also is a place that conveys a sense of life moving on.

It is different from other sites of the Sept. 11 terrorist attacks: the field in Shanksville, Pa., or the empty spot where the huge twin towers of the World Trade Center once stood in New York City.

The Pentagon Memorial, dedicated in 2008, is adjacent to the enormous facility housing the Department of Defense and its more than 26,000 employees. It is alongside a busy Washington highway and under the flight path of the nearby airport. Cars and trucks are almost always whizzing by, or crawling along depending on the time of day, and about every minute a plane flies overhead.

There is no ground zero sense of something missing, since the damaged side of the Pentagon was repaired within a year, and there is no sense of being set apart from the rest of the world as in the rural Shanksville setting.

On an evening nearly a month before the 10th anniversary of the terrorist attacks, a worker cleared gravel from the base of one of the stainless steel benches symbolizing those who died when American Airlines Flight 77 crashed into the side of the Pentagon.

“It’s hard to be here. It brings sadness to me,” said Nyeanati Y Smith, a 65-year-old Liberian native who has been working a few nights a week at the Pentagon Memorial for the past three years. He makes sure the grounds are clear, water is flowing in the fountains under each bench and lights underneath each bench are lit.

The memorial is open 24 hours a day, and Smith said family members and friends of those killed tend to visit the site late at night. Seeing them huddled in sadness is particularly hard for him.

Pointing to the benches, lined up in chronological order according to the victim’s date of birth, from ages 3 to 71, Smith said he often thinks how these people just came to work or got on a plane that day and “didn’t plan to die.”

“These people didn’t deserve this,” he said.

Before he could get back to his job at hand, a group of tourists asked him some questions. Nine-year-old triplets from Chicago wanted to know why the benches face opposite directions. He explained that the 59 benches facing away from the Pentagon represent those who were on the plane and the 125 facing the other way are for those who were inside the Pentagon. Individual names are engraved at the end of each bench.

One of the triplets also asked about where the plane hit and Smith pointed to the different shade of stone that makes up a large section of the building’s side.

Part of the stone from the Pentagon’s damaged limestone walls is incorporated in a border at the entrance of the memorial with the inscription “September 11, 2001 9:37 a.m.” – marking the exact time the hijacked plane crashed, almost an hour after the first plane hit New York’s World Trade Center and about 20 minutes before the plane crashed in Shanksville.

Kristen O’Shea, mother of the triplets and a 12-year-old girl visiting the memorial, has a personal connection with the attacks of Sept. 11. A former flight attendant with United Airlines, O’Shea was pregnant with the triplets and on bed rest during the fall of 2001. A co-worker and friend of hers was on United Airlines Flight 175, the second plane to hit the World Trade Center.

O’Shea can’t help feeling that she could have easily been on that flight.

She also is conscious that the attacks impacted the whole country, making everyone “a little more patriotic and maybe a little kinder” in the days and months afterward, a feeling she thinks is now fading.

On Aug. 18, just after a thunderstorm swept through the nation’s capital and a double rainbow appeared over the Pentagon, O’Shea said the Pentagon Memorial is important because it not only reminds people of the tragedy but gives them a place to reflect.

The fact that this event “happened in my lifetime and not a moment in history is important,” she said. “We were all a part of it and it had such an impact on us.”