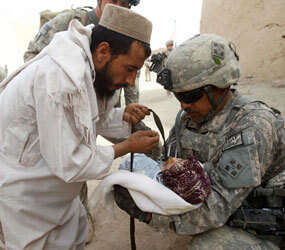 WASHINGTON – The American bishop who serves as president of Pax Christi USA has called for the end of the U.S.-led war in Afghanistan.

Auxiliary Bishop Gabino Zavala of Los Angeles told a gathering of about 70 Pax Christi members and supporters Sept. 16 that the military path chosen by the United States has led to greater violence and less security for Afghan people.

“Despite all the claims by U.S. officials and the media, the situation in Afghanistan after nearly nine years of U.S.-led liberation is horrendous,” Bishop Zavala said.

He cited recent reports by the U.S. government, U.N. agencies and humanitarian organizations that pointed to rising violence, increased rates of civilian casualties and slowed development in Afghanistan since the surge at the end of 2009.

The bishop’s comments came hours after Secretary of Defense Robert Gates’ upbeat assessment that the Obama administration’s surge strategy that saw an additional 30,000 American troops sent to the Central Asia nation to root out Taliban insurgents seemed to be working.

Among the reports to which Bishop Zavala referred was a U.S. government study that found American spending on humanitarian aid dropped from $545 million in 2002 to $80 million in 2010. A U.N. report on human development found that Afghanistan ranked 173rd out of 178 countries in 2004. In 2009, an updated report showed Afghanistan ranked 181st out of 182 countries, he said.

“Contrary to any claims of success in Afghanistan, these statistics reveal a deteriorating situation for ordinary Afghans and undermine the argument that the continued presence of the U.S. military is vital to security and development there,” Bishop Zavala said.

“The war must be brought to an end,” Bishop Zavala said to applause.

“Nine years into this war, a clear and achievable objective has still not been identified,” he said. “The increase in troop levels has increased the number of casualties. The militarization of humanitarian and development aid has turned critical civilian projects into military targets.

“The strategy of using aid as a weapon has failed to win hearts and minds and is instead fueling further violence. I say again, the war must be brought to an end and just as in Iraq, a timetable and date must be established for our withdrawal.”

After his talk, Bishop Zavala told Catholic News Service that until the United States alters its approach on the delivery of aid to alleviating poverty rather than on winning the loyalty of Afghans the military campaign will not succeed.

He also called on U.S. citizens to look beyond media portrayals of the war and to learn about the impact of violence on normal Afghans.

“The reality is when you look at it nine years later, none of what we started this war for has happened,” he said. “Are we more secure? Are we more fearful? There’s more destruction and more poverty in Afghanistan.”