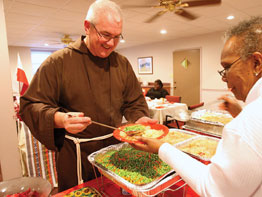 “I’ve heard Polish jokes my whole life, and it’s all in good fun,” said the 46-year-old priest. “I thought this was a fun way of teaching the parishioners a little bit about Polish traditions, while raising a little money for the church.”

With traditional polka music playing in the background, Father Zaborowski welcomed 35 parishioners who paid $25 each to sample homemade Polish fare.

Several parishioners of the predominantly black parish confessed they had limited knowledge of Polish culture.

After teaching parishioners the Polish word for hello (dzien dobry), Father Zaborowski pointed to a pamphlet at each place setting with facts about Poland – such as 90 percent of Poles are Catholic and 75 percent of them are practicing Catholics.

With the aroma of pierogi made by the Vincentian Sisters of Charity, kluski and kapusta (noodles and cabbage) prepared by the pastor’s mother, and pork with an apricot-vodka glaze cooked by the priest using his Polish grandmother’s recipe, Father Zaborowski offered a prayer of thanksgiving.

“I wanted to give you all a little taste of my background,” he said. “This gives us an opportunity to share a little culture, food and friendship.”

Though Father Zaborowski warned parishioners Polish food was an acquired taste, Ernestine Nelson of Park Heights called the delicacies on her plate scrumptious.

“I’ve had the kielbasa and sauerkraut before, but this is the first time I’ve tried the rest of it,” Ms. Nelson said. “I’m more than pleasantly surprised.”

Though 81-year-old Alphonsus Butler of Randallstown eagerly sampled the homemade Polish fare, the history lessons of Poland intrigued him the most.

“I’ve known a lot of Polish priests, but really haven’t had a whole lot of experience with Polish food or culture,” Mr. Butler said as he asked his wife, Betty Butler, to pass the “Polka-Dot” Riesling. “This whole dinner is a great learning experience, and it’s just plain fun.”

Ultimately, Father Zaborowski wanted participants to celebrate their differences in cultures while embracing their similarities in faith.

“How did this white kid from Pittsburgh end up in a black church in Baltimore?” he asked. “What unites us is our faith. Together we’re making church.”