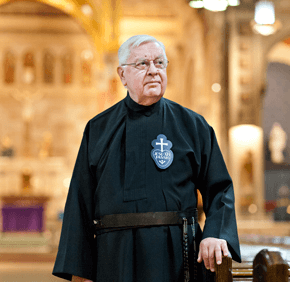 By Elizabeth Lowe
elowe@CatholicReview.org
After nearly 150 years of service to the parish, the Passionist fathers will no longer shepherd St. Joseph’s Passionist Monastery in Irvington, effective July 1.
The Archdiocese of Baltimore is expected to assume control of the parish June 30, according to Passionist Father Thomas McCann, administrator of St. Joseph’s. In a letter to parishioners explaining their departure, Passionist Father Robert Joerger, provincial, cited an aging and declining number of priests in the order.
Established in 1868, St. Joseph’s is the only parish at which the order has ministered in the archdiocese, Father McCann said.
The parish’s legacy is “the history of the relationship with the people of the parish over the years and the Passionist fathers and brothers,” said Father McCann, who has served intermittently at the parish since the 1970s. “The emphasis is on the great charity of the parishioners and their faithfulness over the years, their dedication. It’s just like a family.”
In recognition of the Passionists contributions to the parish, Archbishop William E. Lori will celebrated 11 a.m. Mass at St. Joseph’s April 13, Palm Sunday.
Father McCann said that St. Joseph’s has about 300 registered households.
The parish will not change its name, said Baltimore Auxiliary Bishop Denis J. Madden.
“We are working very hard to make sure that we can keep the parish going,” he said.
Fred Schneider, a St. Joseph’s parishioner and former Passionist priest, served as associate pastor from 1976 to 1979 and pastor from 1984 to 1986.
“The Passionists have had a tremendous influence on the spiritual wellbeing of the Catholic community in Baltimore and all over the world,” said Schneider, 65, former archivist for the parish. “I hope that the parish will continue to be a place where people feel the love of Christ when they walk through those doors.
“As people used to say, you feel God is present here. There’s something special about this church. I hope there will continue to be the devotion that the Passionists brought to the community.”
The monastery from which the parish took its name closed in 1989. A parish school, established in the 19th century, became the parish school of St. Bernardine in 1997. It was one of 13 schools closed in 2010 as part of an archdiocesan consolidation of schools.
As previously reported in the Catholic Review, Project PLASE (People Lacking Ample Shelter and Employment), a Baltimore nonprofit that provides housing and supportive services to the homeless, bought the former parish school building from the archdiocese and is working to transform it into 60 convalescent units and 30 permanent apartments and offices for the nonprofit.
The nonprofit works with people 18 and older who have depression, HIV, alcohol and drug addiction and other mental health issues.
The project continues to move forward, Father McCann said.
“We’re hoping when Project PLASE opens that will be a source of ministry for us, too,” Schneider said.
The church and rectory are owned by the Archdiocese of Baltimore.
Who are the Passionists?
Founded in 1741, the Passionists are a global order of Catholic priests, religious brothers and sisters, and laity who proclaim God’s love for the world revealed through the Passion of Jesus Christ, according to information from the religious order.
Did you know?
Archbishop Martin J. Spalding, who served as the archbishop of Baltimore from 1864 to 1872, invited the Passionists to the archdiocese in 1865, establishing the fourth foundation of the Passionist order in the country, according to the parish history.
Also see:
Chrism Mass shows church at its best
Faith, forgiveness marked life, death of young man killed in shooting
PrevNext