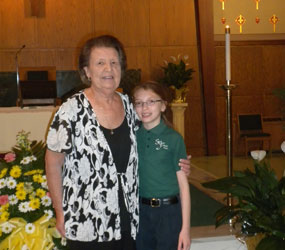 An idea that germinated in war-torn Iraq brings joy and peace of mind to a 12-year-old girl in Pasadena.

That is the short version of the story of the Bernadette C. Fischer Scholarship Fund.

The long version, however, begins more than three decades ago, when Bernadette Fischer (then known as Mrs. Desverreaux, or “Mrs. D”) taught at St. Jane Frances School.

In 1975, the mother of five lost her husband, who was killed by a drunk driver. Life changed forever for her and her children, then ages 9 to 18.

“It wasn’t easy for my kids,” she said. “They had to work like crazy to help me out, and they all turned out well.”

Fischer believes that those difficult times are part of the reason that her children all grew up to be so focused on giving back to the community that supported them. It was her son, Robert, a trauma surgeon, who dreamed up the scholarship fund while serving in Iraq.

“During his deployment Robert was reflecting on his family and his faith. He wanted to give something back to the school that did so much for – and meant so much to – us kids and our mother,” said his sister, Jackie Hamilton, an attorney who did much of the legal work to initiate the fund, which will annually award a $5,000 scholarship to a middle-school student at St. Jane Frances de Chantal.

Rowan Baio, a rising seventh-grader, was awarded the inaugural Fischer Scholarship in May.

“When Rowan was doing the paperwork, I was trying to tell her not to get her hopes up,” said Caroline Baio, her mother.

“I was very surprised, I was ecstatic actually,” Rowan said of the good news. “I was hoping to win, but I didn’t think – out of all the people who were applying – I would. I thought the application was just good practice for resumes and stuff.”

Rowan participates in chorus, band, science club and Young Catholic Leaders. This summer she has been participating in the parish’s Summer Mission, which pairs volunteer work with a fun activity once a week. She also occasionally lends her aunt a hand at Happy Helpers for the Homeless in Glen Burnie.

The scholarship competition is open to sixth- and seventh-graders who are parishioners of St. Jane Frances de Chantal. Selection is based on the “student’s academic achievement and excellence, commitment to community service, integrity, initiative and self-direction, Christian character, and financial need.”

“Rowan is a beautiful girl – a somewhat quiet girl – who is very dedicated to her studies,” says Michelle Jones, principal of St. Jane. “She participates in helping in just about anything we do. Rowan would exemplify the kind of school we have. The school and the people are really dedicated to the children and the community.”

All five have raised money to endow the fund, and voted to narrow down the list of candidates for their mother to choose the winner. There were only three finalists this year, because three of the five board members put forth Rowan’s name.

Fischer taught at the school for 31 years. Retired more than a decade ago, she has seen more than just her own children grow into productive adults.

“I’ve taught a lot of kids who have been very successful,” she said.

The scholarship gives her the opportunity to help another student.

For more information, go to fischerfund.org.