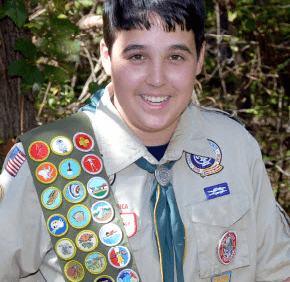 Matthew Gibson, 17,  was recognized at an Eagle Scout Court of Honor at St. Jane Frances de Chantal Parish in Pasadena Nov. 3. Gibson, a member of Troop 414 and a sacristan and former altar server at the parish, led the construction of a rosary walk for his Eagle service project.

The walk, made of Pennsylvania bluestone pavers, is set in the shape of a rosary in front of the Mary garden between the church and the rectory. It was completed in April, and according to his mother, Judy, it is used by religious education classes and individuals.

The cost, approximately $575, was funded by donors, including the Knights of Columbus and Ladies of the Knights, Council 10966; the Pasadena Chick-fil-A and Whiting Turner. Gibson’s work crew included eight Eagle Scouts, seven Troop 414 leaders and five other volunteers.

In 2008, according to his mother, Matthew was awarded Scouting’s National Certificate of Merit, along with several other Scouts and Troop 414 leaders, for their part in the rescue of a family whose canoe had overturned on the Shenandoah River.