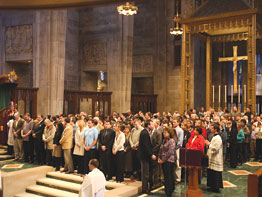 “This is really going to happen.”

That same thought ran through the minds of Gwen Walton-White, Lisa Russell, Sonia Bui and Gene Luong March 1, as they approached the altar at the Cathedral of Mary Our Queen in Homeland.

Each had been called forward by Archbishop Edwin F. O’Brien during the Rite of Election and Call to Continuing Conversion.

“It was like walking down the aisle for a marriage ceremony,” Mrs. Walton-White said. “It was very special and very sacred.”

The day was a bridge for the four, who will complete their journey into the Catholic Church at the Easter Vigil in their respective churches. The Catholic Review is chronicling them in a three-part series that will conclude in April.

Ms. Russell and Mr. Luong were joining the ranks of elect, those committing to baptism and the sacraments of Holy Communion and confirmation, along with 221 other catechumen.

Among the 421 candidates for conversion was Mrs. Walton-White, who spent her life in African Methodist Episcopal and Baptist churches while her late husband was Catholic. She has been studying in the Rite of Christian Initiation of Adults class, along with Ms. Bui and Mr. Luong, at St. John the Evangelist in Columbia.

Ms. Bui, a lifelong Catholic and the wife of Mr. Luong, was never confirmed.

“I feel like when I finally get confirmed, I’ll be complete,” Ms. Bui said. “I’ve felt outside. I want to take this important step in the church community.”

Ms. Russell felt a series of emotions as she looked up and down the 373-foot-long church.

“I’m nervous,” she admitted, before adding with a smile, “I’m excited.”

Ms. Russell, who was raised in the Pentecostal tradition, long admired the faith of sponsor Susan Josselyn’s family and wanted to join her at Sacred Heart in Glyndon.

“She’s taking it so seriously,” Mrs. Josselyn said after the ceremony. “She’s come so far.”

The archbishop is looking for people like Ms. Russell.

“Your own godparents and teachers and this entire community have spoken in your favor,” the archbishop said. “The church, in the name of Christ, accepts their judgment and calls you to the Easter sacraments. Since you have already heard the call of Christ, you must now express your response to that call clearly and in the presence of the whole church.

“Therefore, do you wish to enter fully into the life of the church through the sacraments of baptism, confirmation and the Eucharist?”

A few minutes later, the 421 candidates for conversion accepted the archbishop’s call to sit at the eucharistic table and to be sealed with the Holy Spirit.

Before the catechumens and candidates departed, the archbishop delivered a special message.

“Now, my dear children, you are set out with us on the road that leads to the glory of Easter,” the archbishop said. “Christ will be your way, your truth and your light … walk always in his peace.”

The group knows that their participation in the Rite of Election and the Call to Continuing Conversion sets them on a new course.

Similarly, Ms. Russell has found a completion through her religious pursuits.

“I’m starting to become the person I want to be and it’s all because the church, the sponsorship and the community,” she said. “It’s wonderful.”

Next: At the Easter Vigil April 11, the catechumens and candidates will receive their sacraments and enter fully into the church.