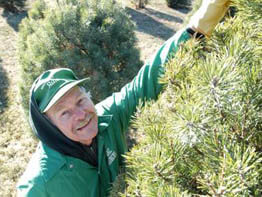 LEAVENWORTH, Kan. (CNS) — The question made Duane Olberding laugh: Are you as jolly as Old St. Nick?

“I don’t know about being as jolly as Old St. Nick, but I do enjoy helping people get a nice Christmas tree,” said Olberding, a member of St. Joseph Parish in Leavenworth.

Olberding, who recently retired as a guidance counselor at Immaculata High School in Leavenworth, has played a key role in making Christmas merry for Leavenworth families since 1984. He’s watched families grow up as they have come back year after year.

Olberding is a Christmas tree farmer. Getting a tree for a family makes him feel like he’s part of their Christmas celebration.

“It’s probably why I’ve done this for so many years,” he told The Leaven, newspaper of the Kansas City Archdiocese. “If I thought about all the work I have to do with the trees in June, I would have probably quit a long time ago. But at this time of the year the people come out, the kids are laughing, and they’re happy with their tree. It’s something I can add to their family tradition, and I do enjoy that.”

Olberding’s trees are in city residents’ homes, and in the homes of American and foreign military officers who study and train at Fort Leavenworth. One of his trees can be found at City Hall this year, and others are at the Sisters of Charity of Leavenworth motherhouse. And, of course, Olberding has two of his trees in his own home.

Most people only think about Christmas trees in December, but Olberding thinks about them all the time — understandable, since a small forest of 1,000 pines and a few spruces practically adjoins his house.

Olberding grew up on a farm near Sabetha, but decided on a career in education. After teaching at St. Joseph Military Academy in Hays (now Thomas More Prep-Marian), he moved to Leavenworth in 1973 to teach and counsel students at Immaculata.

He and his wife, Betty, decided to buy 40 acres about three miles southwest of town and farm part time.

“We had some land near a pond on our property that was kind of useless, a grassy area with some brush,” he said. “The water table was good there, so we thought we’d experiment with trees. We’d seen other Christmas tree farms and we thought this would be educational and fun.”

The tree farm was to be a family project. He convinced his four children (then in grade school) that they should invest some of their own money in the venture and work at it to grow their own college fund. Over the years, the children got a percentage of the sales.

There were some years when they sold an average of 300 trees, but now they generally sell 150 to 200 trees annually.

Christmas tree farming is definitely a long-term proposition, as it takes about eight years to grow a 6-foot tree.

Most of the work of growing Christmas trees takes place during the summer. Every spring Olberding sprays for bugs and culls out any trees infected with blight. In June, Olberding begins to shape the trees, and he does it the old-fashioned way: with hand-held shears.

Some tree farmers spray a green dye on their trees, but Olberding will not, because it suppresses the smell. To tweak a tree’s green color, he suggests adding a bit of green food coloring to the water after it is put in its stand at home.

Other than the bugs eating his trees and the inevitable rogue deer stripping out a few branches, there is only one thing that truly bothers Olberding: seeing Christmas trees discarded by the side of the road the day after Christmas.

“I do not like that,” he said. “The Christmas season is actually from Christmas through Epiphany. People have missed the whole thing if they throw their tree out the day after Christmas.”