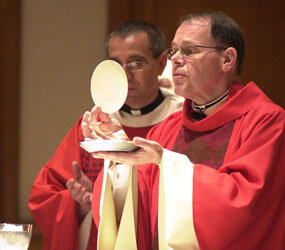 CHATHAM, N.J. – Father Edward Hinds touched many people during his 35 years of priestly life, the last six of which were spent as pastor of St. Patrick Parish in Chatham in the Paterson Diocese.

His brutal murder in the rectory of St. Patrick Church Oct. 22 stunned the diocese and the nation. As parishioners, friends and brother priests mourned his sudden loss, they also remembered him fondly.

“He would knock on the door to my home and just say hello,” said Ryan, who lives a few houses away from the church. “When he would come into the kitchen, he would open the pots on the stove and say, ‘Let’s see what you’re making today,’ and have a taste. He became part of our lives and in turn we became part of his.”

The body of the priest, who was stabbed 32 times, was found Oct. 23. The parish janitor, Jose Feliciano, 64, was arrested and charged with first-degree murder. Prosecutors said Oct. 25 he had confessed to the murder.

According to Feliciano’s written affidavit, he was arguing with the priest in the rectory the evening of Oct. 22, took a knife from the kitchen and stabbed the priest. CNN reported that Morris County Prosecutor Robert Bianchi said the two men were arguing over Feliciano’s continued employment.

Feliciano had worked for the parish since 1992 when he moved to New Jersey from Puerto Rico. He was baptized a Catholic at St. Patrick in 1996, and sent his children to the parish grade school; his youngest is still an eighth-grader there.

Funeral arrangements for the priest had not been finalized.

John Polanin, parish trustee at St. Patrick, said his fondest memory of Father Hinds was from the parish picnic this past summer.

“It was a beautiful sunny day and the park was filled with people. Father Hinds was wearing a straw hat and sunglasses and was so happy. He skipped around and greeted the people. To me that’s what it was all about for Father Ed, being among his people,” he said.

Father Hinds’ slaying “has wounded the hearts of all who knew him. Already, many people have told me about the profound and lasting impact that he had made in their lives,” said Bishop Arthur J. Serratelli of Paterson in a column scheduled to appear in the Oct. 29 issue of The Beacon, Paterson’s diocesan newspaper.

“We mourn his passing, for we know that Father Hinds strove, within the limits of our common humanity, to open for others the way to the heart of Christ,” he said.

Being among the people was an essential part of Father Hinds’ priestly ministry. Retired Bishop Frank J. Rodimer of Paterson remembered Father Hinds, who served as his first priest-secretary after he was ordained a bishop in 1978. “It was his own personal preference to serve in the parish ministry,” he said. “Even though he had advanced degrees in canon law and was trained for administrative work, he wanted to directly work with people.”

His pastoral care for the people of his parish left an indelible impression as Ryan recalled Father Hinds’ concern for her daughter, who gave birth last April.

“My grandson, Colin, was in NICU (the neonatal intensive care unit) and he would visit my daughter and him in he hospital. Father Ed was such a great comfort to my daughter. He was so giving in that way,” Ryan said.

“We had just moved to town and really had no close friends,” she said. “We joined the parish when I was in the hospital having just delivered our stillborn baby girl Sereana. When I got home, Father Ed was the first person in my house.

“His compassion and warmth was something I will never forget. He did the memorial Mass and he delivered one of the most beautiful homilies, reciting a Welsh poem we now have framed in our home,” she said.

Patricia Bartle, who recently retired after serving as diocesan director of worship and spirituality, worked with Father Hinds on the diocesan liturgical commission.

“One word to describe him would be authentic,” she said. “One virtue would be simplicity. While he was a very learned man, he came across as very caring and compassionate. He was a very close friend to me and he was always a tremendous support even since I had retired in June. He was my wall that I leaned up against whenever I needed someone.”

Monsignor Edward Kurtyka, judical vicar for the diocesan tribunal and pastor of St. Paul Parish in Prospect Park, said, “He was a very competent canon lawyer. I respected his opinion greatly. You can just see he was very familiar with the law.”

Feliciano, who was being held on $1 million bail, was to have been in court Oct. 27, but the hearing was postponed because he had been hospitalized for an undisclosed illness. He was being kept under guard at the hospital.