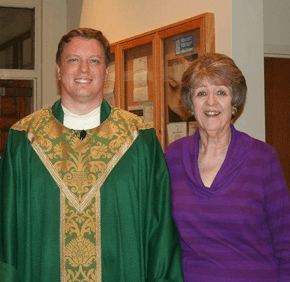 By Elizabeth Lowe
elowe@CatholicReview.org
Twitter: @ReviewLowe
Sharon Bialek, mother of Father Mark S. Bialek, pastor of Resurrection of Our Lord in Laurel, died May 20 from injuries she sustained after being struck by a car May 18 in Parkville, according to Baltimore County police.
Sharon Marie Bialek, 67, and her husband Robert Bialek, 71, of Baltimore, were crossing Putty Hill Avenue in a crosswalk when they were struck by a 2004 Toyota Tacoma turning onto Putty Hill Avenue from Harford Road around 9:30 p.m. May 18, according to police.
The Bialeks were transported to Shock Trauma Center in Baltimore for treatment of potentially life-threatening injuries, according to police.
Robert Bialek was discharged from Shock Trauma May 20, said Cindy Rivers, a Shock Trauma spokeswoman.
The driver, a 59-year-old man, remained at the scene, according to police. The crash remains under investigation at this time and no citations have been issued.
“She (Sharon) came to the parish on multiple occasions, she and her husband Bob,” said Shaun Guevarra, pastoral associate at Resurrection of Our Lord in Laurel. “She was a loving woman and she just touched people. There was something about her that everybody was very happy to have her around.”
Sharon Bialek attended Mass at Resurrection May 12, Mother’s Day.
“Father Mark gave her flowers hidden away and gave her a big kiss,” Guevarra said. “Father Mark is their only son, the only child, and you can tell how loving they were and how they were always looking out for people in the community.”
“On behalf of the entire staff and parish community of Resurrection of Our Lord, we are deeply saddened at the passing of Father Mark’s mother, Sharon Bialek,” according to a statement from the parish. “She was a God-loving woman whose strength was in her kindness that manifested itself in her sincere pure-of-heart personality that touched so many lives, both young and old. Her smile, warm hugs, appreciation and concern for others will be greatly missed but we will always hold her memory within our hearts. Sharon, we will help your husband Bob, keep an eye on your son, who you both are so proud of and who has been one of your greatest gifts to us all.”
“We are all deeply shocked and saddened by this tragic accident involving Mr. and Mrs. Bialek,” according to a statement from the Archdiocese of Baltimore. “In prayer, we are present with Father Bialek and his entire family as they mourn their loss and offer fervent prayers for the repose of the soul of Mrs. Bialek.”
Visitation is from 2 to 5 p.m. and 7 to 9 p.m. May 23 and May 24 at Schimunek Funeral Home at 9705 Belair Road in Nottingham.
A Mass of Christian Burial is scheduled for 11 a.m. May 25 at Shrine of the Little Flower in Baltimore.
Copyright (c) May 21, 2013 CatholicReview.org
PrevNext