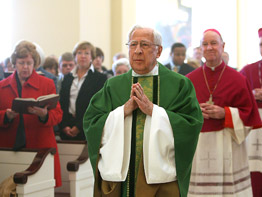 Parishioners of the first Catholic cathedral in the United States gathered Jan. 27 to celebrate the last Sunday Mass with their beloved rector, Monsignor James V. Hobbs. Monsignor Hobbs, who has served as a priest for more than half a century, will retire Feb. 1.

The pews at the Basilica of the National Shrine of the Assumption of the Blessed Virgin Mary, Baltimore, were full during the farewell Mass for the priest, who plans to move into the Thurmont house where he was born.

“I don’t know where to begin,” Monsignor Hobbs announced at the beginning of the 10:45 a.m. Mass. “I’ve never had a retirement Mass. So, I guess we’ll start as usual.”
He was joined at the altar by Archbishop Edwin F. O’Brien and the two retired archbishops of Baltimore, Cardinal William H. Keeler and Archbishop William D. Borders.

“I saw (Monsignor Hobbs) as a spiritual man who has been able to bring the spirituality of the basilica to new vistas,” Cardinal Keeler said at the opening of his homily, which also served as a tribute to the 77-year-old priest who has been the basilica rector since 1992.

Monsignor Hobbs’ 16-year term as rector of the basilica has been eventful. Baltimore’s co-cathedral saw visits from both Pope John Paul II and Mother Teresa during those years, the completion of a $32 million restoration, and more than 100,000 visitors since it re-opened in November 2006.

“Monsignor Hobbs is an institution here,” said Hal Bruce of Owings Mills, a parishioner of the basilica for the past 12 years. “We will miss him terribly. He has a heart that is so big. But, he is also a very unassuming man.”

Following his ordination on May 25, 1957, Monsignor Hobbs’ first assignment was at St. Mary, Cumberland, where he served as an associate pastor for 15 years before becoming pastor of St. Rose of Lima, Brooklyn, from 1972 to 1978.

From 1978 to 1992 Monsignor Hobbs served as an associate pastor of the Cathedral of Mary Our Queen, Homeland, before becoming rector of the basilica.

“He’s so wonderful to the parishioners here, said Bernie Galiszewski of Baltimore, who has served as an usher at the basilica for the past 26 years. “We’re really going to miss him.”

Like many priests who retire, Monsignor Hobbs will continue ministering, assisting pastors in Central Maryland parishes like Our Lady of Mount Carmel in Thurmont and Shrine of St. Anthony in Emmitsburg.

“He will continue to walk with Jesus in retirement,” Cardinal Keeler said at the close of his homily. The retired prelate then walked past Monsignor Hobbs and bowed before him.

Father Jeffrey S. Dauses, 44, the current pastor of Church of the Holy Apostles, Gambrills, will become the new rector of the basilica Feb. 1.