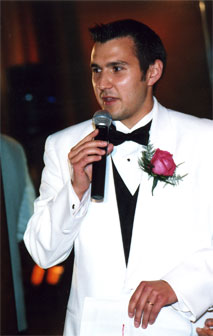 The pressure was on for Steve Ryan to produce a great best man speech at the wedding of his good friend, Michael Williams. Mr. Williams had been Mr. Ryan’s best man more than a year earlier – delivering a stellar speech that guests remembered as funny, witty and touching.

“He did a great job, so I felt I owed it to him,” said Mr. Ryan, a 27-year-old parishioner of the Church of the Annunciation in Rosedale who befriended Mr. Williams at The John Carroll School in Bel Air.

Mr. Ryan started working on his speech a month before the wedding, carefully recalling special moments in the lives of his friend and his friend’s fiancée. A week before the big day, he committed it to memory.

When his moment in the spotlight finally arrived, Mr. Ryan was ready. Standing in front of 200 people at the Tremont Hotel in Baltimore, he delivered a speech that impressed.

“People told me they thought it was really good,” said Mr. Ryan, whose speech centered on the theme “One Street Away.” He retold the story of how even though his friend lived “one street away” from his future bride, he never would have met her had he not been introduced by Mr. Ryan and his wife.

“Preparation is really key,” said Mr. Ryan. “I think a good speech includes not only the events of your friendship with the groom, but also your thoughts on the couple’s relationship.”

To give a memorable speech, Mr. Ryan suggested that a best man keep his address between two and three minutes. He advised standing when delivering it. It’s also important to make eye contact and remember who’s in the audience, he said.

“You should keep it clean and remember that grandparents might be there,” he said.

And there’s one more tip to remember.

“If the best man’s friend gets married first, set the bar high,” Mr. Ryan said with a laugh.