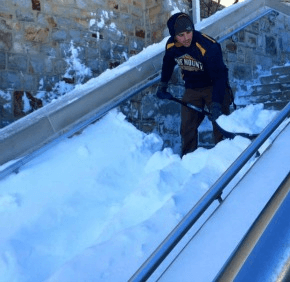 The record-breaking blizzard that dumped 29 inches of snow on Baltimore Jan. 23 closed schools throughout the archdiocese and forced many parishes to cancel weekend Masses, but it failed to shut down vital outreach ministries to the homeless and others in need.

Our Daily Bread Employment Center in Baltimore, operated by Catholic Charities, continued its 35-year streak of providing daily meals no matter the weather conditions. On a typical day, approximately 750 people receive a meal. There were 247 patrons on the day of the blizzard and 308 the day after.

“Hundreds of Baltimoreans in need turn to Our Daily Bread for sustenance each day,” said William McCarthy Jr., executive director of Catholic Charities, “and for many, this is the only meal they will eat on any given day.”

During weather events such as the blizzard, McCarthy said, the plight of the homeless and the hungry can get lost.

“That’s why it is so critically important that we continue to provide for people in need,” he said.

Many of those who staff Catholic Charities’ programs spent the entire weekend at program sites to provide uninterrupted care to clients. Several residents of Christopher’s Place, an outreach to formerly homeless men, helped shovel out Our Daily Bread and My Sister’s Place.

On the day of the blizzard, she said, volunteers traveled to Beans and Bread in Fells Point via sled and on foot to provide meals to those in need. About 60 people turned out for a meal that day. Boots, hats and gloves were also distributed, Eaton said. St. Vincent de Paul’s homeless shelter at Sarah’s Hope in Baltimore operated at maximum capacity, with 150 patrons – 15 more than normal.

“We all need to pull together to make sure everyone is taken care of,” Eaton said.

One day before the storm hit, the Archdiocese of Baltimore issued a news release noting that Catholics are excused from meeting their obligation to attend Mass when there is a grave reason such as unsafe travel due to severe weather conditions. Many parishes canceled all weekend Masses, while others offered liturgies attended by only a handful of people.

Thirty-one inches in Westminster was not enough to shut down St. John, according to Monsignor James P. Farmer, the pastor.

On Jan. 24, all five Masses were celebrated as scheduled, he said.

“The company that did our (snow) cleaning did a tremendous job,” Monsignor Farmer said.

Still, the heavy snow made getting around during the storm very difficult, he added, noting that sick visits and emergency anointings continued where necessary at Carroll Hospital Center, Dove House hospice and the 16 nursing homes covered by St. John.

“The weather doesn’t stop our duties,” he said.

Overall, Monsignor Farmer added, “We were very blessed. There were no injuries or anything like that; everything went fine.”

“We survived,” said Father Michael Foppiano, pastor of St. Agnes in Catonsville and St. William of York in Ten Hills.

St. Agnes had 40 attend Mass Jan. 24, he added, including eight Dominican sisters who live nearby.

“There’s nothing sensational to report, thank God,” Father Foppiano said. “Our lots were cleared (Jan. 25); there were no damages; the heat works; and no water got inside.”

While Father Kevin Mueller celebrated Mass alone Jan. 24 – “I was waiting for maybe a couple people in four-by-fours,” he said – his parish, Our Lady, Queen of Peace, in Middle River fared more or less the same as most others in the archdiocese.

“By Sunday night our entire lot was clear,” Father Mueller said, noting his gratitude toward parishioners who arrived with plows and shovels to remove the snow.

However, no parishioners at Mass meant that the parish took a financial hit.

“We didn’t have to count the collections for Sunday; that’s for sure,” Father Mueller said.

At St. Mark in Fallston, Father Gerard Francik spent a good portion of Jan. 25 on the roof of the rectory, removing snow to avoid a possible collapse.

“It looks like we got three feet (of snow), and I was worried about ice dams adding to the stress on the structure,” the pastor said.

While all weekend services were canceled at St. Mark, Father Francik said that “Father (William J.) Foley and I celebrated Mass (Sunday around noon) at the dining room table in the rectory for the parish.”

“Our offices are open, today and we happen to have a finance meeting tonight,” Father Francik said Jan. 26.

At St. Peter in Hancock, an otherwise light attendance at 10 a.m. Mass Jan. 24 was swelled by seven members of the Dunlap family from Antioch, Ill.

Coming home from their second National March for Life, Chris and Annie Dunlap and five of their six children weathered the worst of Jonas in a Frederick motel Saturday night, then found St. Peter through Masstimes.org.

“We had difficulty getting our van up the hill, but a parishioner named Paul directed us to a safe parking spot,” Annie Dunlap said.

That would be Paul Tiller, whose family was featured in the January issue of the Catholic Review.

Once in the church, the Dunlap boys, David, 15, and Joseph, 13, were Father John J. Lombardi’s altar servers.

“It’s a small church, but we could feel that the faith is lived there,” said Annie Dunlap, whose family worships at St. Raphael the Archangel Parish in Lake Villa., Ill.

Christian Kendzierski, director of media relations at Mount St. Mary’s University, said the field house connected to the sports complex at the Emmitsburg school suffered a partial roof collapse during the blizzard. The building was unoccupied at the time, he said, and no one was injured.

A structural engineer did an assessment of the entire complex, which was found to be safe and without structural damage. The field house remains closed until the fabric roof can be reconstructed, Kendzierski said.

Following the snow storm, approximately 40 students participated in “Dig out the Mount,” an effort organized by the university’s office of social justice. Carrying shovels, they assisted workers in clearing out pathways and other areas where approximately 34 inches of snow had fallen, Kendzierski said.

Tom Alban, director of risk management for the archdiocesan division of fiscal services, said he had received just one claim for damaged properties, for a small awning collapse at a Catholic Charities property, so far.

“I’d like to say that’s it, but I think we’re going to see more claims being reported on Thursday and Friday,” Alban said, noting that many have not had time to fully assess their properties.

He added that he had tried to get the word out before the storm, reminding everyone to clear snow from downspouts and gutters so that snowmelt could drain from roofs.

If the one claim is all that materializes, Alban said, “it would be a small miracle.”

The back-to-back 2010 storms, popularly known as “Snowmageddon,” resulted in 117 claims, he said.

“We were lucky even with that,” he added.

Nolan McCoy, archdiocesan director of facilities and real estate, said most parishes and schools had snow removal contracts in place well ahead of the storm, though a few, he said, called the archdiocese for recommendations.

“We’re slowly opening back up, and people are coming back to work,” he said.