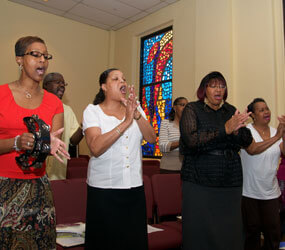 Catholics at several parishes throughout the archdiocese are hearing something new at Mass.

As some pastors take Archbishop Edwin F. O’Brien up on his offer to allow the early introduction of the musical settings of the new English translation of the Roman Missal, parishes have begun rolling out new versions of the Gloria, Holy Holy and eucharistic acclamations.

The archbishop allowed parishes to introduce the settings in September – several months earlier than the planned Nov. 27 launch at the start of Advent – as a way of familiarizing them with the music. Since the Gloria is not sung during Advent, with the exception of the feast of the Immaculate Conception, Catholics would have otherwise not been exposed to the new Gloria until Christmas.

Parishes still have the option of waiting until Nov. 27 to introduce the new music at the same time other changes in the wording of the liturgy will be implemented.

Music publishers are offering several new settings of the new translation. Some have simply reworked already-existing settings, while others have composed completely new musical arrangements.

Berta Sabrio, director of liturgy and music at St. Francis in Fulton and acting director of the Baltimore chapter of National Pastoral Musicians, is pleased to be able to choose from many different settings.

“What I’m hearing is that we are such a diverse archdiocese, that it would have been catastrophic to only have had one or two settings to pick from,” she said.

Sabrio expects that it will take some time before one musical setting becomes the “common denominator” among parishes, much as Marty Haugen’s “Mass of Creation.”

“I don’t think we can force it,” she explained. “I think that it will happen naturally. No one said everyone has to use Mass of Creation. It just happened.”

St. Francis will begin using the revised setting of the Mass of the Angels and Saints by Steve Janco Sept. 18, starting with the Gospel acclamation, Memorial acclamation, Amen and Lamb of God. On Oct. 2, the Holy Holy will be added, followed by the Gloria on Oct. 23.

Sabrio acknowledged that it will take time for congregations to become comfortable with the new language. During a recent practice session, members of her choir sang the new Holy, Holy four times – and on each occasion, someone sang the words incorrectly even though they were right in front of them.

“It’s going to take some getting used to,” Sabrio said. “Like everything else, we will adapt and do what we need to do to enhance our worship.”

“It went over very well,” he said. “The words seemed to have a deeper meaning. Our people were open to it. Once we got permission to introduce the music earlier, there was an interest and an enthusiasm. That was very good.”

Monsignor Nalepa hopes the new words and music together “will create a very warm and inviting atmosphere.”

Brendan Walls, music director of St Elizabeth Ann Seton in Crofton, said his music ministers are learning the new Gloria from the revised Mass of Light by David Haas.

“The whole parish has been singing the present version with faith and fervor for years,” he said, “and I don’t want us to lose the momentum just because a few words have changed.”

The parish will later learn the new settings of the Holy Holy, Glory to God and memorial acclamations from the Mass of Creation.

Stephen Lay, music director at Church of the Resurrection in Ellicott City, has composed an original musical setting of the new translation.

“I had set the old Glory to God to music and we have used it for a few years,” he said. “This time, I wanted to try and set the whole thing. My first inclination was to adapt the Glory that I had previously written. But the text is so different that I found that to be very difficult and it was going to really change it so much that I decided to start new.”

Lay incorporated similar motives, melodies, harmonies and/or rhythms throughout the setting to create a sense of cohesiveness and assist people in their learning/singing of the Mass parts, he said.

“The Gospel acclamation, the Holy, Holy, Holy, the mystery of faith and the Great Amen all borrow different aspects of the Glory to God,” he said of his composition. “In addition to that, they are all in the same key and time signature.”

Resurrection began using Lay’s Gospel acclamation/alleluia; the melody of which is taken from the beginning of the Glory to God. In September, the parish introduced Lay’s Holy Holy Holy, the Mystery of Faith, the Great Amen and the Lamb of God. In October, the Gloria will be introduced.

“It is my hope that after the people have gotten used to singing these much shorter pieces,” Lay explained, “they will be able to put it together (along with some other material) into the much longer Glory to God. Then they will have approximately 6-7 weeks of singing, and then will hopefully be prepared for Dec. 8, Christmas and beyond.”