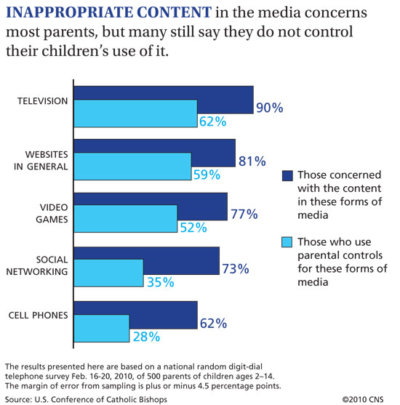 WASHINGTON – Parents are concerned about the content of the media to which their children are exposed and are eager to exert more control over that exposure.

Those are two principal findings in a national survey commissioned by the U.S. Conference of Catholic Bishops.

Parents are right to express concern about their children’s exposure to media but have not historically displayed a willingness to follow through, according to Emory Woodard, an associate professor of communication at Villanova University in Pennsylvania.

In the USCCB survey, dated March 2010 but not released until April 15, more than 80 percent of those who responded said they wanted to be able to control access to media content depicting sex, violence, illegal drug use, alcohol abuse and profane language.

The survey, “Parents’ Hopes & Concerns About the Impact of Media on Their Children,” found that three-fourths of respondents say makers of media products should do more to help protect children from inappropriate media content, while 58 percent say government also should do more.

The study suggested that parents are using control technologies more than previously thought.

But Woodard, the Villanova professor, said he undertook a study 10 years ago in which 100 parents were given television sets with the v-chip, then a new technology that enabled parents to block shows with certain TV Parental Guidelines, the TV industry’s self-policing ratings system. By the time the study had concluded, according to Woodard, only 10 families had utilized the v-chip.

“Parents always have good intentions,” Woodard told Catholic News Service in an April 23 telephone interview. “But they are often so busy with running their own lives, and shuttling the kids back and forth for various activities, that they don’t make it (parental media controls) as high a priority as they say they do.”

The survey did not take films into account. Movies remain the one form of entertainment media that is relatively difficult to access, Woodard said; the only one tougher is live performance.

But with cinema, that degree of difficulty is lessening, Woodard told CNS.

“You saw ‘Avatar,’ the highest-grossing movie of all time, is out on video now, and it’s been only four months since it was released in theaters,” Woodard said. “All it takes now is four or five months and you can get it in your home. And more and more, you don’t even have to drive to a video store to get a copy. You can order it up online and maybe even see it on your computer.”

Woodard said otherwise-objectionable content, regardless of the media platform, can be safely viewed at home – but only if parents are watching with their children.

“And when you’re watching, you can’t just watch it passively,” he added. “You have to talk about what’s going on and why it’s happening. That’s how you provide understanding and context.”

The survey was conducted Feb. 16-20 by Issues and Answers, a polling firm from Virginia Beach, Va. It interviewed 500 parents of children ages 2-14. The margin of error from sampling is plus or minus 4.5 percentage points.