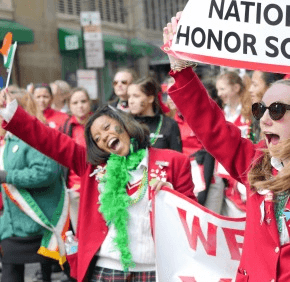 By Karen Osborne
kosborne@CatholicReview.org
Twitter: @ReviewOsborne
Downtown Baltimore was filled with the spirit of the Emerald Isle Mar. 15 during the celebration of the annual St. Patrick Parade.
To view a photo slideshow, navigate the arrows below.
Onlookers wearing all shades of green crowded both sides of Charles Street to run the Shamrock 5K and see performances from dozens of pipe-and-drum ensembles, Mummers’ troupes and Irish dancing schools. Spring-like sunshine battled with a cold winter wind as attendees vied for strings of green beads, waved to friends marching with the Ancient Order of Hibernians, and cheered students in local high school marching bands.
A number of Catholic organizations also marched in this year’s parade, including dozens of parents, students and teachers from archdiocesan Catholic schools, a marching band and color guard from Calvert Hall College High School, seniors from Mercy High School, the crew team from the Institute of Notre Dame, and cheerleaders from The Catholic High School of Baltimore.
Parade organizers named Stacie Guerin, vice president of Irish Charities of Maryland and the Maryland Irish Festival, the parade’s grand marshal, while Monsignor John J. FitzGerald, executive director of the Apostleship of the Sea, which serves sailors and mariners who pass through Baltimore’s seaports, served as honorary grand marshal.
Among the crowds were Dennis Kratz of Sacred Heart in Glyndon, who entertained neighbors with high-flying antics from his dog, Koo; the Sheldon family from Our Lady of Grace in Parkton, whose daughter, Abigail, was dressed in traditional Irish costume, and Erica Michel of St. Alphonsus in Woodstock, who attended the parade in an “Irish Princess” tiara with two friends.
“We love this parade,” said Karen Sheldon. “We try not to miss it.”
Before the parade, hundreds of Catholics attended the official Parade Mass, celebrated by Auxiliary Bishop Denis J. Madden, at the Basilica of the National Shrine of the Assumption of the Blessed Virgin Mary on Charles Street.
Bishop Madden waved to the parade marchers from the steps of the archbishop’s residence along the parade route. He was joined by the basilica’s rector, Monsignor Arthur Valenzano, and Monsignor Carl Cummings, pastor of St. Jane Frances de Chantal in Pasadena.
Also see:
Education is D’Adamo family business
Winter takes toll on school calendar, collection basket
O.J. Brigance leads opposition to assisted-suicide bill
PrevNext