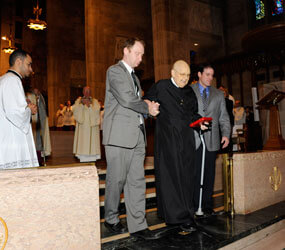 In a joy-filled Nov. 20 prayer service recognizing 27 men and women in the Archdiocese of Baltimore with special papal honors, one moment seemed to shine above the others.

As Xaverian Brother James Kelly approached the sanctuary to accept the Cross Pro Ecclesia et Pontifice at the Cathedral of Mary Our Queen in Homeland, Archbishop Edwin F. O’Brien came down from the bishop’s chair to greet the longtime president of Mount St. Joseph.

Brother James, who is dying of prostate cancer, accepted the honor as loud applause turned into a sustained standing ovation inside the packed cathedral. Some in the congregation dabbed tears as the 64-year-old school leader smiled.

Asked at the end of the service how he felt to be showered with love, Brother James called it a “great gift.”

“I couldn’t even begin to put it into words,” he said. “So many of these kids that are here, I taught.”

Brother James was one of 19 to receive the Cross Pro Ecclesia Et Pontifice, a papal award founded by Pope Leo XIII in 1888. Four others were named Knights or Dames of St. Gregory the Great, an order founded in 1831 by Pope Gregory XVI who named it after Pope St. Gregory the Great.

Alison J. D’Alessandro, director of the archdiocesan office of child and youth protection, was awarded the Benemerenti Medal, an honor created by Pope Pius VI in 1791.

Monsignor Richard Hilgartner and Monsignor Adam Parker were recognized as monsignors with the title of “Chaplain of His Holiness,” while Monsignor Arthur Bastress was elevated to the highest class of local diocesan monsignors – “protonotary apostolic supernumerary.”

“I don’t know why I got it, but it’s there,” said Monsignor Bastress, accepting the well wishes of parishioners of St. Alphonsus in Baltimore where he is the oldest-serving pastor in the archdiocese. “The Lord has his ways. He’s telling me I’ve got to keep on truckin’, boy.”

Deacon Francis L. Werner Jr. of Our Lady of the Mountains in Cumberland, said he was “shocked and very honored” to receive the Cross Pro Ecclesia et Pontifice. He feels called to serve his community, he said.

“I just feel like it’s my privilege and duty to do so,” Deacon Werner said.

“It’s a blessing for my family and the Oblate sisters who have supported me over the years,” she said. “In any recognition we receive, all glory and honor goes to God.”

In his homily, Archbishop O’Brien thanked the honorees for responding “generously and repeatedly” to Christ’s invitation of service. He called them “sterling examples” and “icons” of “dispossessive love of God and neighbor.”

He pointed out that the Church of Baltimore and the Catholic Church across the country “leads by far every other nongovernmental source in the spiritual, charitable and educational services we offer the neediest in our midst.”

Yet, he said, that fact is not cause for boasting because all are called to serve by their baptismal mandate.

“We serve the Lord not as a quid pro quo,” Archbishop O’Brien said. “We don’t deal or bargain with God on the basis of what he will do for us in exchange for what we do for him and our neighbor. God owes us nothing. He gives us everything.”

Read profiles of all the honorees at www.tinyurl.com/cr-papalhonors2.
Read more about Brother James at