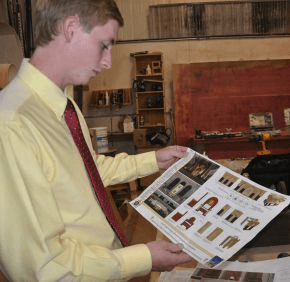 That’s how Joseph Taylor describes the winning design he helped develop for the altar and other furnishings that will be used by Pope Francis during Blessed Junipero Serra’s Sept. 23 outdoor canonization Mass in Washington, D.C.

Taylor, a 23-year-old parishioner of St. Joseph in Sykesville, came up with the design with Matthew Hoffman of Pittsburgh and Ariadne Cerritelli of Bethesda.

The trio formed one of 18 teams of architecture students at The Catholic University of America entering the competition, which was limited to students from the university’s School of Architecture and Planning.

Taylor, who attended Sacred Heart School in Glyndon and then Loyola Blakefield in Towson, graduated from CUA with his teammates in the spring. He said the competition required that the altar’s design be appropriate not only for a papal Mass, but also for permanent use as the main altar in the upper church at the Basilica of the National Shrine of the Immaculate Conception in Washington.

A rendering shows the design for the papal altar that will be used by Pope Francis at the Sept. 23 canonization Mass of Blessed Junipero Serra in Washington, D.C. (Courtesy Joseph Taylor)

The open-air papal Mass will be celebrated on the basilica’s east steps.

“Our major challenge was to come up with something for a basilica that is very ornately designed and that’s furnished with mosaics and expensive materials,” Taylor explained, “while balancing that with the fact we were also designing for a pope who is a very simple guy.”

While other teams focused on being innovative or using modern flourishes, Taylor said, his team concentrated on incorporating traditional architectural elements that already exist in the Romanesque-Byzantine basilica.

The altar features three arches symbolizing the Holy Trinity. Four columns represent the four vows taken by Jesuits, the order of priests and brothers for which Pope Francis was ordained.

The winning design originally called for the altar to incorporate green marble that matched risers and flooring in parts of the basilica, but was later altered to include a rose marble similar to what is featured in the basilica’s baldacchino.

“We designed it so it could look like the altar has always belonged in the basilica,” Taylor explained.

One of Taylor’s main contributions to the altar’s design was employing four mitered panels, his solution for making the altar more lightweight so that it could be moveable.

“It appears that it’s a solid piece,” he said, “and no one will ever know that it’s not a solid block of marble.”

Once arches were incorporated in the altar, Taylor said, it was easy to design the papal chair, which includes one high arch. The ambo, where the liturgical readings are proclaimed, uses similar architectural language.

Lawrence Wroten, a parishioner of St. Peter the Apostle in Libertytown, points out a detail in the papal coat of arms he carved into the papal chair that will be used at the Sept. 23 outdoor canonization Mass in Washington, D.C. (Christopher Gunty/CR Staff)

Lawrence Wroten, a parishioner of St. Peter the Apostle in Libertytown, has painstakingly carved Pope Francis’ coat of arms into the papal chair, made of locally-sourced cherry wood.

The 43-year-old woodworker said he spent many hours on the project, making a 3D model and using a Carvewright CNS router in his work. His goal was to create the effect of a relief carving, he said, while keeping the relief as shallow as possible. He was able to get everything within 5/16 of an inch in depth.

“To get the fine details,” he said, “it’s very difficult.”

Deacon Dave Cahoon of the Archdiocese of Washington, fabricated the papal altar and other furnishings with a team of craftsmen.

Taylor and Wroten both said the realization that their work is for the pope hasn’t fully sunk in.

“I was trying not to think about it while I was working on it,” Wroten said.

Taylor, whose design team was awarded $6,000 when its entry was selected in June and who is pursuing a master’s degree in architecture from Morgan State University in Baltimore, said it’s “still a fantasy” right now.

“Once I see the pope use it, it might hit me,” said Taylor, an associate architect at TCA Architects in Annapolis.

Ideals worth sacrificing for: Pope to challenge U.S. Congress, U.N.