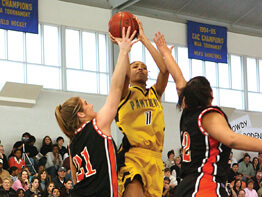 It was a game that will go down as one of the most exciting, well-played contests in the history of the Interscholastic Athletic Association of Maryland.

Delayed a week by the slippery conditions that plagued the area, the IAAM basketball tournament finally got underway Feb. 20.

Each of the top four teams eased past their quarterfinal opponents and headed into their semifinal match-ups with top-ranked St. Frances edging out No. 3 Seton Keough on the Panthers’ home court Feb. 22 by a score of 58-57. But it was No. 4 McDonogh’s 67-49 dismissal of No. 2 Towson Catholic at Towson Catholic that set the stage for a dynamic finals game Feb. 24 at Goucher College.

The St. Frances-McDonogh game was the first of a three-game day for the IAAM as the standing room only crowd edged around the baseline. With numerous ties and lead changes the game came down to the wire, notched at 61-61 as time expired in regulation. A four-minute overtime period was set and down the stretch it went with the senior leadership of St. Frances making all the difference.

Led by seniors Ma-Khida Hankins, LaKisha Walker, TaNika Jeffers and Dawnea Roberts, the Panthers’ tenacious defense, an inside-outside offensive war chest and precision foul-shooting, led the way past a very passionate and talented McDonogh team.
“It was a well-played game by both teams,” said head coach of the Panthers, Jerome Shelton. “We got the breaks down the stretch, and we made our free throws.”

This will be the fifth consecutive year that the Panthers have earned the rights to the A Conference title and six out of the last seven years with Archbishop Spalding taking title honors in 2000-2001.