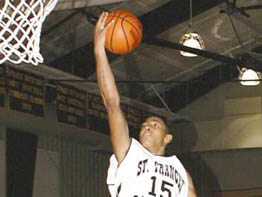 This could be their year and head coach William Wells knows it. The St. Frances Academy, Baltimore, boys’ basketball program has reached new heights this season and is knocking at the door to be recognized as number one.

Currently, Towson Catholic is standing in their way, but at 12-3, 4-1 in the Maryland Interscholastic Association and 3-1 in the Baltimore Catholic League, the Panthers could be a top contender again this year to bring home the championship title in late February.

On Jan. 7, the Panthers surged over Loyola-Blakefield by a score of 68-46, holding the Dons to just 12 points at halftime. The win over Blakefield is an indicator of the talent, depth and range of the Panthers this season. They are both disciplined and talented, but according to Coach Wells, the key remains in playing as a team.

The Panthers are led by team captains Aric Brooks, Desmond Thomas, both seniors, and junior Sean Mosley. Thomas controls the tempo at the point guard position while Brooks and Mosley play the swing slot. All three players can fire the three from NBA standards. Thomas is both savvy and experienced and runs the offense with diligence, patience and poise, guiding the Panthers to look for their best shot.

Mosley and Brooks are very effective underneath the offensive and defensive boards. As combination players, they can hit from the outside, drive to the basket for a slam or just as effectively clear the boards and initiate the team’s fast break. Overall, the team is lightening fast and all five starters bring a great deal of experience and talent to the floor.

Also stepping up for the Panthers this year is 6-foot-5 sophomore, Naji Hibbert, 6-foot-3 senior Anthony Oquendo and Eric Hamilton.

It’s a tight race to the tournament championship with many more games to go.