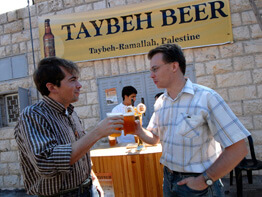 TAYBEH, West Bank – Beer flowed freely, the smell of grilled meat wafted in the air and the beat of the traditional “darbuka” drum resounded through the hillside as this all-Christian Palestinian village celebrated its version of the German Oktoberfest.
Later, when evening fell over the village and people had their fill of sticky Arabic sweets and custard-filled doughnuts, the drum beats were replaced by the pounding sounds of Palestinian hip-hop groups while young, fashionably dressed Palestinians danced to the hypnotic rhythms.
The Taybeh Oktoberfest has been celebrated in September for the past two years out of deference to Muslims who will mark their monthlong Ramadan fast in October.
Some 5,500 people – including members of the international community – attended this year’s festival Sept. 8-9 in Taybeh.
For Sebastien Fagart, the academic services attache of the French consulate in Jerusalem, and his wife, the Oktoberfest was an opportunity to get out and enjoy a family outing on a mild and sunny Sunday afternoon with their 1-year-old daughter.
“A festival of this sort is not a frequent occurrence in Palestine,” he said. “It is a nice atmosphere and the beer is good. We may meet some friends here.”
Andy Dwonch, an American Catholic from Walla Walla, Wash., said he and his wife came to the festival with their daughter in search of handicrafts.
Dwonch, who works for a nongovernmental organization, said, “It is a chance to help the local economy, and it feels good and safe, and the people are friendly.”
Dwonch bounced his daughter on his shoulders as he made his way to the chairs set up in front of a stage as a group of gaily dressed clowns began to perform, and Arabic children’s songs were broadcast on the loudspeakers.
Over the blaring music, Catholic theology students Alex Zaragosa, 29, of Austria, and Manuel Schuster, a 26-year-old German who admitted he had never been to the famous Oktoberfest in Munich, pronounced the beer “good” but sweeter than Austrian or German beer.
Surrounded by 12 Muslim villages, the 1,500 residents of Taybeh say they have a good relationship with their neighbors, but are adamant about retaining the Christian character of the village and historically do not sell land to outsiders. Taybeh is the site of the biblical refuge town of Ephraim, and Jesus is said to have passed through here on his way to Jerusalem. The town also is home to St. George Greek Orthodox Church, one of the oldest churches in the West Bank.
The Oktoberfest was the brainchild of Greek Orthodox brothers David Khoury, village mayor, and Nadim Khoury, brewmaster of Taybeh Brewing Co., which produces the only Palestinian-brewed beer.
Nadim Khoury fell in love with the art of brewing beer while living for a while in Boston. In the late 1990s, after he had returned to the West Bank, he envisioned establishing a local Oktoberfest, but the second Palestinian uprising, or intifada, put the idea on hold.
When David Khoury was elected mayor three years ago, the two brothers joined forces and finally brought the Oktoberfest to life. They enlisted numerous organizations and women’s cooperatives from the village to help boost the whole village’s economy by selling their locally produced wares such as organic almonds and couscous, olive oil, honey, soaps, homemade Arabic delicacies and hand-embroidered crafts.
The local Greek Orthodox and Catholic churches supported the endeavor and opened their doors to visitors.
David Khoury said he could not estimate the profits made during the festival, but noted that one falafel vendor said he sold as many fried chickpea sandwiches during one day of the Oktoberfest as he normally does the whole year.
Randa Marouf Rantisi, a teacher selling homemade desserts to bolster her income, said she had sold four large trays of a soft cheese sweet called “knafe” on one day and had prepared nine trays for the next day.
“This is amazing, fantastic,” said Rantisi as she went to warm up a tray of the pistachio-strewn dessert.
But Abeer Khouryieh said the difficult political conditions continue, and though the festival helps people put aside their worries temporarily, at the end of the festival the problems would still be there.
Acknowledging that two days of festivities cannot make all the ills of the region disappear, David Khoury said that, in addition to trying to market Taybeh beer and other local products to rebuild their economy, villagers were also “trying to build bridges of love and peace between Palestinians ourselves and between Palestinians and people from other countries.”
“Call this peaceful resistance,” he said. “But rather than blowing people up, we should be known as people who like life, liberty and the pursuit of better beer, at least here in Taybeh.”