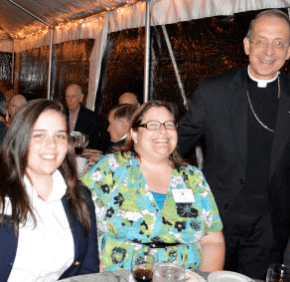 By Paul McMullen
pmcmullen@CatholicReview.org
FREDERICK – From Cecilia Bracey, a freshman at St. John’s Catholic Prep in Buckeystown, to Bernie Grove, who has seen six of his children and three of his grandchildren graduate from the school, nearly 200 gathered at the Ceresville Mansion in Frederick Sept 26 to celebrate 25 years of the Friends of Catholic Education, Inc. (FOCE) and recognize two dedicated contributors.
FOCE, a non-profit, supports Catholic school education in Frederick County. Its John McElroy Award honors the Jesuit who in 1829 founded what is now St. John’s Catholic Prep.
This year’s recipients were Greg Harraka and Joseph Welty, who were instrumental in helping the school complete last winter an arduous relocation from its previous Prospect Hall home in Frederick to a campus in Buckeystown.
Harraka, the senior vice president of Bethesda-based Coakley Williams Construction, and Welty, an attorney with the firm of Miles & Stockbridge in Frederick, both serve on the board of directors of St. John’s Catholic Prep, the former as its chairman since 2004.
In discussing their persistence through the economic downturn that began in 2008, Gordon Oliver, the president of St. John’s Catholic Prep, cited 2 Timothy 4:7: “I have fought the good fight.”
“Greg and Joe have staying power,” Oliver said. “As the financial crisis erupted, St. John’s had been on the verge of selling the Prospect Hall property and moving to a new campus.
“When many were licking their wounds and pulling out of deals … Greg and Joe would lead the charge, the good fight. This was accomplished in no small measure thanks to the many long volunteer hours Greg and Joe committed to ensuring that the present and future of Catholic secondary education flourishes and continues to grow in Frederick County.”
Harraka, the father of three St. John’s Catholic Prep graduates, and Welty were honored at a dinner at the Ceresville Mansion, where Father Lawrence K. Frazier, pastor of St. Joseph-on-Carrollton Manor in Buckeystown, gave the invocation and Archbishop William E. Lori the keynote address.
The archbishop noted the joy of the evening, coming two days after the Archdiocese of Baltimore produced three of the state’s 11 National Blue Ribbon schools. He talked of the intrinsic Catholic identity of the schools in the archdiocese.
“That’s not a program,” he said. “It’s what the church does, preach the Gospel, teach the faith. Identity has to do with our inner-most being. … That is not just something that a Catholic school does. It is part of the school’s DNA.”
In addition to Archbishop Lori, Father Frazier and other Frederick County pastors, the event drew many past recipients of McElroy Award, such as Grove, the 1995 recipient who traveled from his retirement home on the Eastern Shore. His son, David, the 2009 honoree, joined Oliver in remarking on the contributions of Harraka and Welty.
Bracey, the St. John’s Catholic Prep freshman and a FOCE scholarship recipient, handled her turn at the podium with aplomb. A parishioner of St. John the Evangelist in Frederick, she thanked her current teachers, and the ones who taught her at St. John Regional Catholic School, also in Frederick.
Bracey spoke about the community involvement, academic excellence, and most importantly, the faith, she has found at Catholic schools.
“I love the way we celebrate Mass together,” she said. “In theater, everyone has a pre-show ritual. I decided I’d say the prayer my math teacher says before class every day.”
For more information about the Friends of Catholic Education, visit friendsofcatholiced.org/
For more articles on Catholic education, click here.
PrevNext