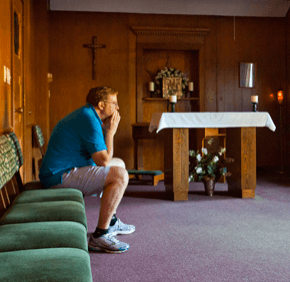 By Paul McMullen
pmcmullen@CatholicReview.org
Twitter:@ReviewMcMullen
FAULKNER – Chemical weapons in Syria, flooding in Colorado, the household checking account balance, Orioles and Ravens, a marathon viewing of the first two seasons of Homeland before the new one premieres, Facebook, Twitter, weather and traffic on the fives …
Whew.
On the second weekend of September, I was among 30 adults who set aside serious concerns and mundane distractions for an Ignatian retreat at Loyola on the Potomac in Southern Maryland.
To view a slideshow, navigate the arrows below.
We paid $235 for two nights lodging, meals and 40 hours of silence broken only by liturgical responses and song, and sharing.
“Turn off your phone,” Jesuit Father Frank Kaminski instructed on the evening of Friday the 13th. “Give yourself a break. Give others a break. It can be liberating.”
Bob Dylan warned of “the heart attack machine” in 1965, long before cell phones and personal computers quickened the pace of life. Four-plus centuries earlier, St. Ignatius of Loyola wrote “He who carries God in his heart bears heaven with him wherever he goes.”
The founder of the Jesuits inspires Father Kaminski. He and Ginny Licata, our other retreat leader, told us to “embrace the chaos” of daily life, practice introspection, talk to God and open ourselves to his signs.
Atop a bluff in Charles County, on a bend in the Potomac not far from the oldest continuous active parish in the U.S. with a continual pastorate, I plopped on a bench that first night and admired a third-quarter moon to the south and the Big Dipper to the north. Seemingly on cue, a shooting star split the night sky.
The next morning, Father Kaminski described “One of these days that beckons you to go outside. We never stop to smell the roses, smell the coffee, smell anything. We are too busy. Slow down. Renew, refresh and recreate your soul.”
Some signs are easier to read than others. Hiking to the youth center – while wearing a “Lewis and Clark” T-shirt no less – I misread the trail map and returned too late to raise my hand when Licata, prior to Mass, asked who had signed on to give the First Reading.
All activities were optional, but there were few absentees during an itinerary that included four motivations to prayer using the theme “Rivers of Living Water.” We considered Creation, the Flood, Exodus and the baptism of Jesus.
“What is a shipwreck,” Father Kaminski asked, “if God is the ocean?”
“Be like the peacock,” Licata said. “Like them, we’ve got to learn to dance in the rain.”
We read, took pencil and oversize paper to draw the river of our life, listened and prayed, outside, with the rosary, in two chapels, before the Blessed Sacrament, or in simple quarters with a single bed, sink, toilet, small chest of drawers, desk, chair and crucifix.
During Saturday Mass, Father Kaminski – who grew up in St. Casimir in Baltimore and Immaculate Heart of Mary in Baynesville, and went to Loyola Blakefield (Class of ’64) and what is now Loyola University Maryland – noted the dichotomy between our surroundings and demands.
“This is not spiritual fantasyland,” he said. “It’s boot camp.”
Ignatian exercise requires sustenance, and for all our prayer, there was no fasting. We dined on crab cakes, pancakes and sausage, spaghetti, baked chicken. The dining hall was open 24 hours, with drinks, fruit and cookies. Come Sunday, the jar of oatmeal raisin cookies needed replenishing.
(While most of the 4,500 who annually use Loyola on the Potomac hail from Virginia and the Archdiocese of Washington, it draws from a few parishes in the Archdiocese of Baltimore, among them St. Ignatius in Baltimore. A plaque outside the chapel honoring contributors includes the name of its pastor, Jesuit Father William J. Watters.)
After Sunday Mass, we broke silence. At lunch, I sat down with my Friday night dinner companions from Prince George’s County, a Head Start teacher and an 84-year-old father of 10 and “20-some” grandchildren.
They were retreat veterans. No longer a novice, I wondered: When is the next one?
Also see:
Pet blessings will be offered in the Archdiocese of Baltimore
PrevNext