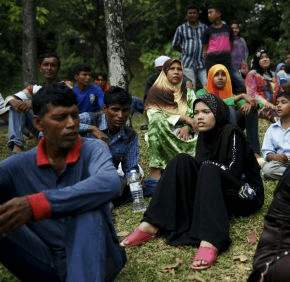 MILWAUKEE – Witness to the power of prayer was in evidence as nearly 600 people gathered for a concelebrated Mass for peace at a Milwaukee Catholic church in an area of the city that has been ravaged by violence.
Capuchin Father Michael Bertram, pastor of St. Francis of Assisi Church, termed it a “celebration of power … a power of faith — a power we have in Jesus Christ.”
That power was noted by Milwaukee Archbishop Jerome E. Listecki, the principal concelebrant of the Aug. 13 evening Mass, in his homily based on Chapter 5, verses 13 to 16, of the Gospel of St. Matthew.
“You are the light and salt of the world. You carry Christ into the world,” he told the overflow congregation. “Knowing that you are empowered to do the good, to understand that your prayer moves you to action, that that action in whatever way, shape or form you do it, you do it in his name and it becomes far greater than what we could ever imagine on our own.”
The archbishop noted that the evening’s prayer was a statement that people were working on the same mission: “Our mission is for peace.”
He continued, “We pursue what leads to peace, casting a light on what is good and pleasing to God and dispelling what harms God’s family. Christ is the light, and prince of darkness cannot exist in that light!”
Archbishop Listecki said those who bring violence to the community need “the darkness of ignorance, the darkness of apathy, the night of isolation.”
“We must pledge ourselves to be salt and light for communities, understanding that we begin with prayer and our action leads us to proclaim his peace in building up one another,” he said.
Cheryl McGee, a St. Francis parishioner for 40 years, said her parish continues to pray for an end to violence.
“We pray for our children and we want people to be safe and keep faith in God that everybody is going to be OK,” she said.
McGee cited the importance of the archbishop celebrating the Mass.
“I hope his presence gives people a sign that he cares — that he cares and is praying with us for an end to the violence,” she told the Catholic Herald, a publication that serves the Catholic community in southeastern Wisconsin.
Acknowledging that groups came to the Mass from various communities, Father Bertram said, “(They are) reminding us this is not just a problem of the central city; it’s something that concerns us all. It’s a powerful signal of our community praying for our city at a time when we need it.”
Among those at the Mass were 46 people from a cluster of parishes in the Milwaukee area but outside the city’s center.
Father Michael Moran, pastor of one of those parishes, St. James in Menomonee Falls, said: “It’s encouraging that it wasn’t only people who live in the central city.”
He added, “Hopefully, it will inspire some very concrete actions that can address root causes.”
Sam McLain Jr., a member of St. Francis of Assisi for 10 years and piano accompanist at that parish and Milwaukee’s All Saints Parish, accompanied the 60-member choir that included members from St. Francis, All Saints and other parishes.
“It was beautiful,” he said of the celebration and the choir. “I wanted to show that this thing is bigger than black, white, yellow, brown; the murders and homicides going on in Milwaukee affect everybody as a whole.”
McLain anticipates that similar Masses will be celebrated throughout the community.
“It will show people in community that we (Catholic Church) actually care,” he said. “We really do care. We want to try and help to make a difference.”
Father Bertram concurred.
“The Catholic Church is as concerned as any community about the issues that plague the central city, be it violence and killing, or the other issues that are related to it,” he said, noting it was important for church leadership, laity and clergy, to say, “We need to pray about this, we need to come together to invoke God — God be with us, us, lead us, strengthen.”
Although he sees the challenges facing the community as “formidable,” Father Bertram expressed optimism about what might result from the Mass for peace.
“It was a launchpad here tonight. I’ll be excited to hear what ideas come out from folks from this night,” he said, referring to discussions about what the church should do to address problems in the city.
“We’ve got to do something now. We’ve prayed, we’ve called upon God. Now it’s time for action,” Father Bertram said. “Our faith is not stagnant and the issues that we have cannot allow us to be stagnant either. We have to be out there doing something.”
Copyright ©2015 Catholic News Service / U.S. Conference of Catholic Bishops.
See also:
Archbishop Lori pays visit to key partner in bringing relief to West Baltimore
Archdiocese commits $100,000 to city youth jobs
Archbishop prays for peace in midst of aftermath of Freddie Gray funeral
PrevNext