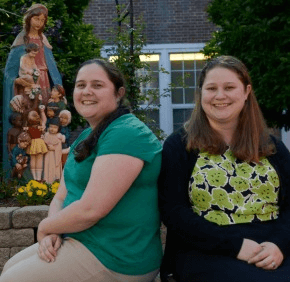 By Maureen Cromer
mcromer@CatholicReview.org
Millions of young adults are heading to  Poland for World Youth Day 2016.
Lauren and Amanda Urban will travel to Krakow with pilgrims from the Archdiocese of Baltimore, thanks to the Mark D. Pacione Foundation.
It honors the memory of a prominent leader of youth and young adult ministry in the archdiocese, who died suddenly in December 2014. His legacy lives on through the foundation, which  “support(s) the faith life and leadership development of young people and the adults who minister with them.”
Lauren Urban, dean of academics at The Seton Keough High School, attended WYD 2000 in Rome with Pacione.
“It was a year of Jubilee,” she said,  “so the Holy Doors were open – much like this year during the Year of Mercy. We tried to get through the four Holy Doors (at the major basilicas in Rome). Most of the group did, but Mark didn’t.
“On the last night we formed an archway with our hands to be his last holy door. I remember the smile on Mark’s face as he was walking through the hands of the pilgrims of the archdiocese. Afterwards he said the young church was his holy door.”
Amanda Urban, a nurse practitioner, attended WYD in Paris in 1997, and again in Rome.
“One of the ways we have been preparing for this trip has been attending monthly meetings with the group from the archdiocese,” she said. “We have learned about Poland and (St.) John Paul II, prayed the rosary and spent time getting to know other pilgrims.
“After every gathering, I want to tell Mark about it. As you can imagine this experience has been bittersweet. I hope I serve his memory and the foundation well.”
Pilgrims from the archdiocese will spend two weeks in Poland as part of their faith journey. Along with the events of World Youth Day, July 25-31, they will visit various cathedrals, monasteries and the Nazi concentration camp at Auschwitz.
“Mark (Pacione) was someone who opened the doors of the church for many people,” Lauren said. “He was our holy door.”
For a blog about the archdiocese’s participation at World Youth Day, click here.
See also:
Rebuilding: Summer camp adds to healing efforts in West Baltimore
Service went above, beyond
PrevNext